Do you want to be able to learn trumpet music with ease?

As annoying as it may seem, learning your trumpet scales can reduce the stress of learning repertoire.

Fortunately, you can make learning scales enjoyable and something to look forward to each day:

Here’s How to Play Trumpet Scales:

To play trumpet scales, consider what notes go into the scale in question. Decide how fast the scale will be and how many octaves it will cover. Then, take a deep breath and play the scale as evenly as possible. Think about how it sounded, and use that to improve the next time. 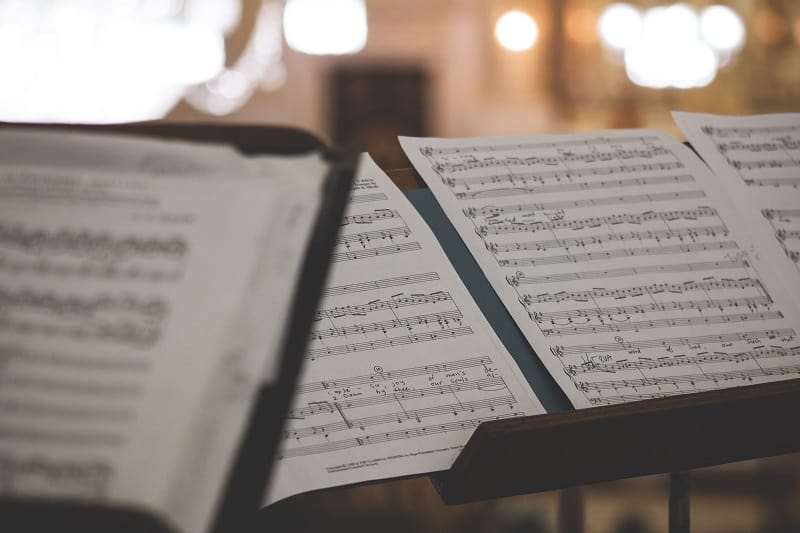 One of the most useful tips for learning trumpet scales is to learn key signatures.

The key explains which notes will or won’t be part of a given scale. If you know the key signature for a scale, you can figure it out without looking at the scale on paper.

You need to know which notes the scale requires to make sure you remember the fingerings. If you don’t know all of the notes, you can learn them, or you can focus on a different scale for now.

No matter the key signature, scales will follow a specific pattern between the notes.

Chromatic scales are the easiest as they use all 12 pitches within an octave. Whole step scales use whole steps, so they skip every other half step.

Minor scales are a bit more complex because there are three different kinds of minor scales. The pattern varies for each type, but minor scales generally lower the third note.

Certain types also lower the sixth and the seventh notes in the scale.

You can figure out a scale with the first note if you know all of the scale patterns. That can help you learn trumpet scales much more quickly.

Like pieces of music, trumpet scales can be easier to learn when you see them on paper.

Look for a trumpet scale book or individual scales on sheet music. Keep the sheet music on your music stand to reference when you want to learn or practice a scale.

Then, you won’t have to worry about the patterns of the scales so that you can learn them more quickly. You can learn the sequence along with the scale to reinforce them.

As you practice with the sheet music, try to look away while playing the scales. Doing so can help you memorize the scale and play it as an easy warmup.

When you’re ready to learn the following scale, you’ll be able to use sheet music and your knowledge of scale patterns.

If you get a trumpet scale book, it can be tempting to try and learn all of the scales at once.

However, trying to learn too many scales can be confusing, and it can be hard to make good progress on any one scale. Instead, choose one scale to focus on and master.

C major is the simplest scale to learn first since it doesn’t have any sharps or flats. Remembering the notes for C major is relatively easy, so you can learn the scale more quickly than a scale like B major, which has five sharps.

Be sure to practice your C major scale regularly until you can play it well. If you want to memorize the scale, you can also work on that during your practice sessions.

Once you feel comfortable playing the first scale, you can add another one. Then, repeat the process for each new scale you learn.

No matter which scale you choose, keep the range small, at least at the start.

If you choose to learn the C major scale, learn the first octave and play from a written middle C to the octave above and back down. That way, you don’t need to know how to play a massive range on your trumpet to start learning scales.

Keeping the scale to one octave also keeps it from getting too long. While you may need to play bigger scales later, you can use this time to study scales without needing as much endurance.

Consider the notes you’re most comfortable playing on your trumpet. You can start learning scales within that range. As you play higher and lower pitches, you can expand the range of your scales.

It would be best if you also focused on playing slowly when you learn a new scale.

Slow practice can seem boring, but it’s crucial for playing the same music well at a faster tempo. Start by playing the scale in half or even whole notes to learn which pitches are in the scale.

As you get a good sound on each note, you can play the scale a bit faster. You might switch to using quarter notes but at a slow tempo, like 60 beats per minute.

Over time, you can increase the tempo by a few beats each day or week. Eventually, you’ll be able to play the scales fast, and you’ll have the foundation you need to play those notes accurately.

If you try to play a scale fast, you may miss a few notes. If it’s really fast, you might not notice that you missed a note, so keep it slow until you get the basics.

When you’re ready to move on to a new scale, you must consider which to learn next.

The trumpet can play a lot of different scales, so try and be strategic about which scales you study and when. For example, if you learn the C major scale, you might want to learn A minor next.

A minor is the relative minor of C major, so they share a key signature. That means the A natural minor scale has all of the same notes. Now, you will need to adjust a couple of pitches in the harmonic and melodic minor scales, but the changes will be small.

If you want to stick to major scales, you can move to F or G major. F major has one flat while G major has one sharp, so they share most notes with C major.

As you learn the different scales, moving to related ones can make learning each new scale easier. You won’t have to worry as much about new notes so that you can focus on the scale itself.

Practicing scales can be very repetitive, and it can be hard to have fun when playing them.

However, you can do a few things to make scale practice more interesting. You can start by playing the scales with a straight rhythm, such as quarter notes or eighth notes.

Switching up the rhythm means you can play the same scale, but it will sound like something new. An easy way to change the rhythm is to play dotted eighth and sixteenth notes to give a swing effect.

If you want to work on triplets or triple tonguing, use your scales for that. Play three notes in a group up and down the scale to reinforce the notes and the rhythm.

9. Apply the Scales to Music

If you’re working on a piece of music, use that to help decide which scale to learn.

For example, maybe you’re playing a piece in Bb major, so you choose to focus on learning that scale. Then, you’ll be able to focus on the same notes in the scale and your repertoire.

A lot of music is based on scales, so learning the scale with the piece can save you time. As you work on difficult sections, you may find some basis in a related scale.

You can even take parts of the music out of context and practice those sections as scale exercises. Once you put the section back into the full piece, it may seem easier.

And when you go back to practicing the standard scale, it might also feel less difficult.

Another thing that can help you learn your trumpet scales is to practice them consistently.

Make time for your scales in your daily practice schedule, and prioritize scales to make more progress on them. You don’t need to practice scales for hours a day, but you should do so regularly.

Then, you’ll learn the notes, and you can process what you learn before your next practice session. If you try to cram all of your scale practice into one day, you may not want to do it.

And you might frustrate yourself by trying to spend a lot of time on scales at once. Instead, spend a few minutes a day on scales throughout the week.

As you learn your scales, you may find practicing them starts to get even less interesting than it used to be.

However, you don’t want to stop playing your scales because you will need them later. Consider a few ways to make your scales more challenging so that you want to practice them.

Of course, you can switch up the rhythm of the scales. You can also increase the speed even more than you’ve done so in the past. If you’ve learned new notes on the trumpet, you can expand the scale range to two octaves.

Try learning all three types of minor scales for all 12 keys. You can even branch out into studying blues scales or pentatonic scales, which you’ll find in jazz and other genres of music.

Keeping scale practice a little challenging can force you to focus while you play. That way, you won’t have to worry about boring yourself to tears.