Anyone who has trouble breathing may find the trumpet easier, but the euphonium is easier for beginners because the embouchure doesn’t take as long to develop. You may have to work longer at your embouchure if you play the trumpet.

The euphonium can also be easier to play since it plays harmonies, while the trumpet often plays the melody.

The trumpet and euphonium are fantastic choices, but they serve such different purposes so that you might find you like one better than the other:

Trumpets are much smaller than euphoniums, so they’re easier to hold and don’t require as much air. However, euphoniums don’t require the firm of an embouchure, and the air isn’t as resistant. Smaller students may find the trumpet easier because they don’t have to struggle to hold it. 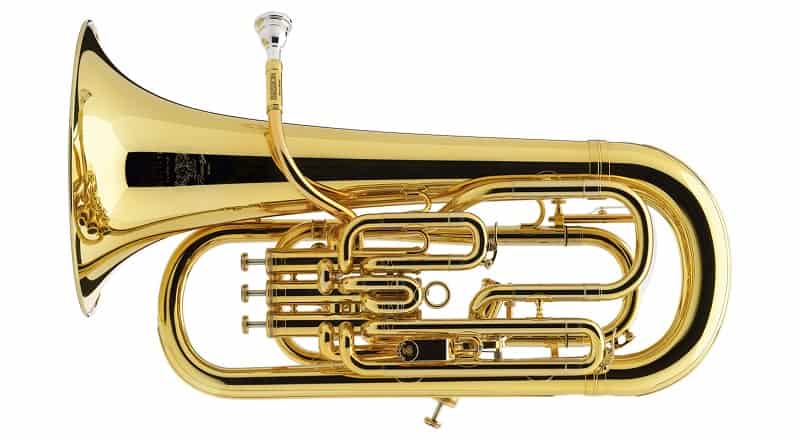 Which of the Two Instruments Is More Popular?

The trumpet is more popular than the euphonium, probably for a few reasons.

First, the trumpet is easier for smaller players, so it’s more common in beginning school bands. You can also play the trumpet in concert band, jazz band, and orchestra, while the euphonium isn’t in jazz or orchestra music.

If you want to play in those different settings, you should play the trumpet. However, the euphonium is a great instrument for wind ensembles and brass bands.

It plays the tenor role, so it has some interesting parts, and it can be nice to have multiple players on the same part.

But while a band piece may have one euphonium part, it may have three trumpet parts. So the trumpet section is usually larger in a concert band or wind ensemble.

How Long Does It Take to Learn Each Instrument?

It would be best if you planned to spend about two to four years learning the trumpet before you can play it well.

It can take about the same length of time to reach a level of proficiency on the euphonium, but you may be able to learn the euphonium a bit quicker since it won’t take as long for your lips to build up endurance for longer practice sessions.

If you can put in the time each day to practice, you might progress more quickly on the euphonium. However, you may need to spend more time practicing the trumpet in short bursts until your lips are strong enough.

Then, you can start to practice more each day.

Another factor to consider is your interest in the instrument. If you really want to play the trumpet, it might not take you as long to build up lip strength and reach an intermediate level.

However, if you force yourself to learn the trumpet or euphonium when you don’t want to, it can take a lot longer to get good at it.

In general, trumpets are more affordable than comparable euphoniums.

The trend continues with intermediate and professional trumpets costing $1,200 to $2,400 or more.

5 Tips to Help You Choose Between Trumpet and Euphonium

Maybe money isn’t a huge factor, and you don’t care about playing a popular or not popular instrument.

Before you decide if you should play the trumpet or euphonium, consider the following tips:

1. Think About Your Favorite Music

First, you should think about your favorite music to listen to and to play.

If you play the trumpet, you can play many different genres, from classical to jazz to mariachi. However, the euphonium isn’t very common outside of concert bands and brass bands.

That doesn’t mean you can’t play the euphonium in other settings, but it might not be as easy.

You may need to create your own arrangements or write original music in a jazz style, or you may need to adapt a trombone part for the euphonium.

2. Compare the Melody and Harmony

Along with genres, the trumpet and euphonium play very different roles in ensemble music.

The trumpet frequently has the melody or a descant part above the melody. However, the euphonium tends to play harmonies against the trumpet or another melodic instrument.

If you want to have many solos and melodies in a group, you may find the trumpet more fulfilling, but if you prefer the lower pitches of a euphonium and play a tenor line, the trumpet might not be the right fit.

While the trumpet is more popular than the euphonium, it can also be more competitive.

You may have to play better than more players in an audition to make it into a wind ensemble. However, you might be the only euphonium player or one of a few, so getting into a good band will be easier.

If you’re interested in playing music in college, you might also find that euphonium scholarships are less competitive.

Schools don’t usually have a problem attracting trumpet players, but euphonium players are more in demand.

Both trumpet and euphonium players have the option to learn other brass instruments.

Trumpet players may learn to play the cornet or flugelhorn. Euphonium players might learn the tuba, marching baritone, sousaphone, or even the trombone.

However, trumpet players don’t need to learn a second instrument to play in those groups.

Before you commit to learning the trumpet or euphonium, give each instrument a try.

Consider if it’s more comfortable to hold a trumpet or if you like the sound of the euphonium better. You may have an idea of the right instrument for you, but playing each can help you make the right decision.

Once you play both instruments, you can know what to expect from them.

Some players may gravitate toward one before playing, and testing them both can make the decision more obvious.

Will You Play the Trumpet or Euphonium?

Playing the trumpet or euphonium can be rewarding, but neither instrument is always better.

Select an instrument that you’re excited to practice and learn.

If you can do that, you’ll be more likely to stick with it and make progress.

GrooveWiz: Is Baritone (Or Euphonium) Easier Than Trumpet?

Buddy Roger’s: How much does a trumpet cost?

Buddy Roger’s: How much does a baritone cost?

As a reader-supported site we sometimes earn commissions when referring to stores.

As an Amazon Associate I earn from qualifying purchases.