As a beginner musician, you might look at an instrument and worry about how many keys and valves it has.

We’ve compiled all the information you need to know about how brass instruments function.

Let’s discuss the valves and keys on brass instruments:

Here’s an Idea of Whether Brass Instruments Have Keys or Valves:

Most brass instruments are constructed with three valves. These valves allow brass players to play a wide range of notes. The trombone is the one exception because it uses a slide to move pitch. The trumpet, french horn, tuba, and euphonium all use a valve system. 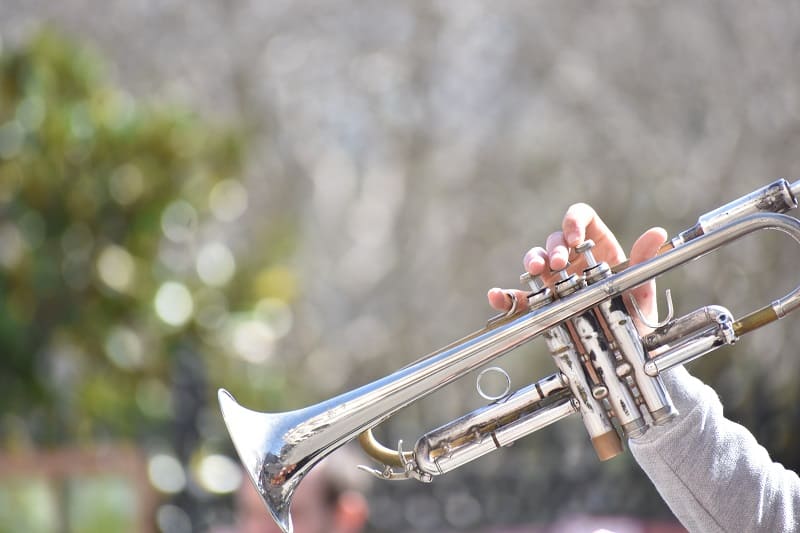 What Are Keys and Valves on Brass Instruments?

Brass instruments can play different notes because they have valves.

Almost all horns have three valves. Players rest their index, second, and ring fingers on the valves, pressing them down to form different pitches.

Like woodwind players, brass players have to memorize different finger positions to learn how to create pitch. Each valve moves air down a long piece of tubing, lowering the pitch.

Although brass instruments don’t have as many keys as woodwind instruments, they have a few that serve important functions.

All brass instruments have water keys.

Because they are wind instruments, players move air through their horns, producing saliva and condensation.

The water key exists to drain this excess fluid.

Brass players frequently hear disruption in their sound because of water buildup and have to open this water key to clear out their horns.

As a musician, you also need to know about the key of your instrument.

Each wind instrument is built to play in a specific key. This isn’t a physical key that you can press.

Most trumpets are Bb trumpets. This means they can play the overtone series based on Bb when they don’t use any valves. These trumpets are built to play in a Bb key naturally.

When playing in an ensemble, you often have to transpose the key. If you play a C on the piano and a C on trumpet, they won’t sound like the same pitch.

The trumpet will sound like it’s playing a Bb.

Because of this, you have to change the way the music is notated. Bb trumpets need to read music that is notated differently because their notes sound different.

The music is adjusted so that the piano and trumpet sound like they are playing in the same key.

Although this can often be a confusing concept, beginners don’t have to worry about this. Their music is already transposed, so they learn the notes on their music.

Which Brass Instruments Have Valves?

Trumpets have existed for decades, but they haven’t always had valves. Modern trumpets have three valves that allow players to hit every note on a chromatic scale.

A french horn’s valves look much different from other valve systems. They are called “rotary” valves, whereas most brass instruments have piston valves.

You can easily spot this difference when looking at a french horn. The valves are long and thin, laying on their side instead of standing upright.

The tuba is the largest instrument in the brass family, and it also has valves. Depending on the tuba, it could have three or four valves.

They serve the same function as valves on other brass instruments.

Some tubas are compensating instruments. These have an extra valve that players can use to make certain pitches more in tune. Professional players use this feature the most, so beginner tubas only have three valves.

Euphoniums also come with either three or four valves. Most professional players prefer a four-valve system.

Which Brass Instruments Have Slides?

The most unique brass instrument is the trombone because it uses a slide instead of a valve system.

Like other brass players, a trombone player creates sound by buzzing into a mouthpiece. This is where the similarities end.

Trombone players can change between pitches by using their right hand to move a slide up and down. If you buzz into a trombone while moving the slide, it’ll sound like the pitch is bending.

Beginner trombone players learn how to make different notes with a slide instead of valves. They can’t simply push down a valve to create a pitch.

With their right hand, they move a slide up and down, which changes pitch.

The trombone has seven different slide positions. It can be difficult for beginners to learn exactly where these are placed.

They have to memorize the positioning of their arm and “feel” where a note is.

What Is the Purpose of the Valves?

Before valves were invented, brass instruments could only play a limited range.

They functioned similarly to bugles. Since they couldn’t rely on valves to change pitch, they used their embouchure and air pressure to move between notes.

Without valves, brass instruments can only play the overtone series. Essentially, they can only hit certain notes, leaving a lot of gaps in between. Brass players couldn’t play all the notes on a piano.

When a valve is pressed down, it redirects air down a different section of tubing. This lowers the pitch by a certain amount.

When valves were invented, this allowed brass players to play a wide range of notes. There were no longer any gaps in their range.

Beginner brass players learn the different combinations of valves and how they relate to pitch. Without valves, brass instruments would only be able to play a limited number of notes.

Even though brass instruments are more simply constructed than woodwind instruments, learning how to make different pitches can still be difficult.

The brass family mostly works because of valves. Each instrument has three or four valves that players press down to change pitch. They could play notes without pressing any valves, but they would have a minimal range.

Trombones are the exception to the rule. They have a unique slide system where players have to move their entire arm to change between pitches.

It’s important to know that learning any new instrument will be difficult. Each instrument poses its challenges regardless of construction.

Anyone can learn how valves work to become a great brass player!

A Brief History of Brass Instruments