The french horn is one of the most unique brass instruments because of its rich sound and unusual construction.

For beginner players, you’ll notice that french horns have two different models: single and double. These vary in function, price, and playability.

Let’s discuss the differences between single and double french horns:

Here’s the Difference Between Double and Single French Horns:

A double french horn has an extra set of tubing that allows it to play in two different keys. Single french horns can only play in one key. Single horns are cheaper, lighter, and easier to play and are ideal for beginners. Intermediate and experienced players choose double french horns. 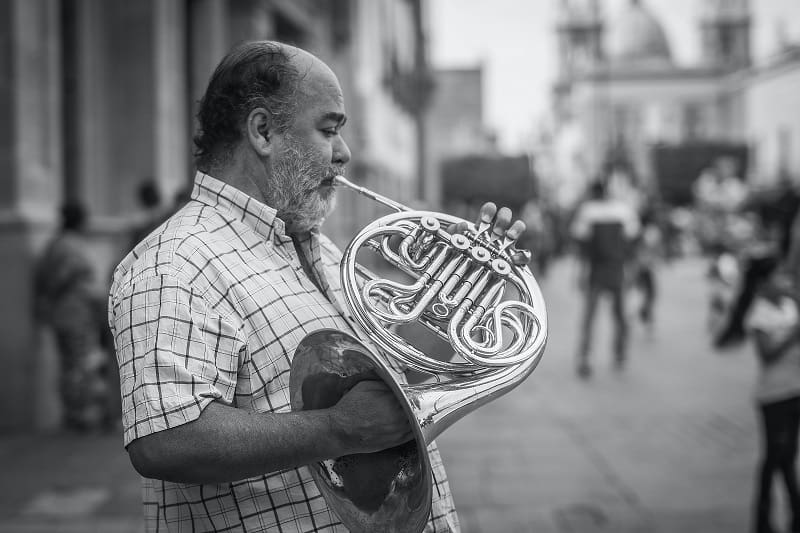 What is the Difference Between a Single and Double French Horn?

The main difference between single and double french horns is the number of valve slides per rotor.

Double horns have two tubing sets, making them heavier and more complicated to use than a single french horn.

Single french horns can either be pitched in F or Bb, but double horns can play in both. Their two sets of tubing are in F and Bb. A player can choose when to play in F or Bb when playing a double horn.

Double horns are very versatile. Using their left thumb, players can press a fourth rotor to shift between the key of Bb to F, or vice versa.

This is beneficial for older students who play more complicated solo or ensemble pieces.

Which One is More Popular Among French Horn Players?

Because they are cheaper, simpler, and lighter, they are more ideal for new musicians.

Single french horns are much more popular among younger students. They are manufactured as the simplest french horn model.

With one length of tubing and three rotors, single horns have easy playability.

In the United States, single horns in F are the most popular french horns. Single french horns are available in either the key of F or Bb, and players in the US typically love the F horns.

Single horns in F have lower tuning, giving it a classic horn sound. It performs very well in the lower or mid ranges. As the cheapest french horn model, beginners can’t go wrong with a single horn in F.

F horns succeed in the lower range but often struggle to play anything higher. Because of this, some students choose to play Bb horns.

Bb horns were constructed to solve the limitations of F horns.

They have a higher tuning, so they can more accurately hit higher notes.

In the UK, Bb horns are much more popular. American music teachers often don’t recommend Bb single horns because they have a poor tone in the lower register.

With younger students who start by learning the lower range, F single horns are much more beneficial.

Intermediate and professional players frequently favor double horns. With a double horn, a player can have an extended range and improved responsiveness.

Double horns can easily shift from two different keys, which is great for advanced players.

Double horns are more expensive, heavier to hold, and complicated to use, so they are not great for beginner players.

Intermediate and advanced french horn players exclusively use them.

How Do You Play a Double French Horn?

French horns are in the brass family because they have similar construction and can play the overtone series without valves. French horn players and other brass players have to learn to buzz into a mouthpiece and proper breath control.

Because french horns use valves, beginners also have to learn the finger positions for specific notes. This is much easier to do with a single french horn. Beginners won’t have to worry about using an extra trigger valve.

The double french horn has a fourth rotary valve, otherwise known as a trigger. When a player uses this, they access the second set of slides in a higher tone.

Is the Single French Horn Easier to Play?

Single french horns are much easier to play.

These are the best choice for beginners because they are less complicated to use.

With a single french horn, you don’t have to worry about changing between keys. Single horns will be available in either F or Bb, but not both.

When beginners start learning how to play a single french horn, the learning process is similar to other brass instruments. New students will learn how to buzz on the mouthpiece, hold the instrument, and make correct fingerings.

Learning a single french horn is easier because it’s lighter. Double horns have much more tubing, so they are heavier to hold, carry, and transport.

Is There Any Price Difference?

Single french horns are much cheaper than double horns.

This is because double french horns have longer tubing and are designed for experienced players.

You should expect double horns to cost around $3,000, although you can find pre-owned models for less.

Choosing the correct french horn can be difficult for new musicians.

It’s important to know the differences between single and double french horns.

Single french horns can only play in one key. Double horns have extra tubing that allows players to switch between the keys of F and Bb.

This can be complicated to learn, so professionals usually play double horns.

Double french horns are great for advanced players. They have an extended range and allow musicians to play much higher notes.