Most people don’t realize that orchestras are arranged in a specific way.

Instrumentalists are placed in seating arrangements that benefit both the musicians and their audience. Generally, brass instruments sit at the back of orchestras, whereas string instruments sit in the front.

Let’s talk about why orchestras have a specific seating chart:

Here’s Why Horns are in the Back of Orchestras:

Certain instruments project more volume than others. Brass instruments are louder than string instruments, so they are placed in the back of orchestras to even out the sound. Most orchestras have this layout to balance the music. 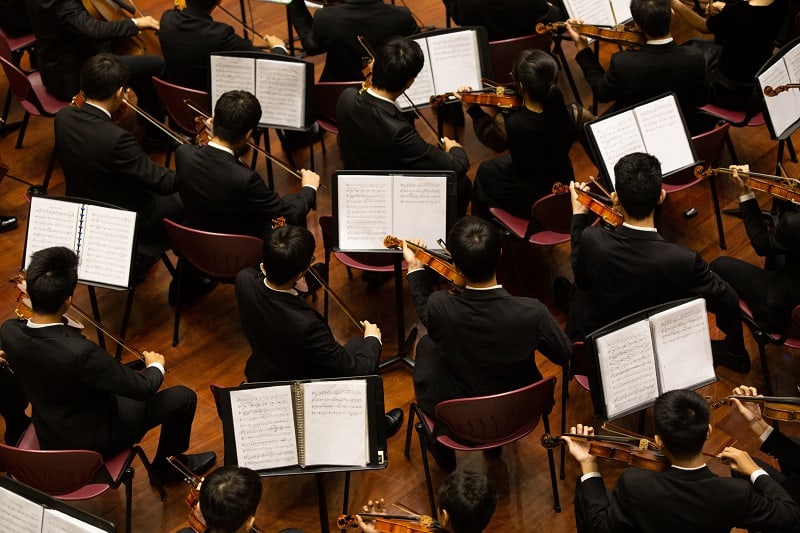 Are Brass Instruments Always Placed in the Back of Orchestras?

Brass instruments are commonly placed in the back of orchestras.

This is because an orchestra conductor needs to worry about how the music sounds to an audience.

Brass instruments can project their sound and be much louder than other instruments. Conductors consider this when organizing an orchestra.

Many orchestras generally use this traditional seating chart, but some have tested other ways of seating specific music pieces.

Due to their high volume, they need to be farther away from the audience.

Especially when multiple brass instruments play together, they can get pretty loud. Even when they try to play soft sections, they will naturally be louder than the woodwind or string sections.

An orchestra compensates for this problem by seating brass in the back. This makes sure that softer instruments are more easily heard.

Why are the Violins Always Placed in the Front?

Most orchestras will have violins in the front.

Violins often carry the melodic line, which is the most important part for the audience to hear.

In any piece of music, the melody is extremely important. The violin section is frequently given the vital task of ensuring that the audience can hear the melody.

The audience most wants to hear the melody. Anyone can listen to classical music, and most people without music knowledge will not think about the harmonies or other technical aspects of music. However, they will probably recognize a great melody.

If violins were placed at the back, behind the brass, they would not be heard. The brass would overpower the violins, and the audience would miss out on a great melodic theme.

The brass section can occasionally carry the melody, but they can easily project their sound over the rest of the orchestra. Softer instruments like violin, flute, or clarinet would not be able to do that from the back of the ensemble.

Violins are also placed in the front of orchestras because of aesthetic reasons.

Violin is played by moving a bow across strings, and many violins playing together can be beautiful to watch. Having the violins in front ensures that everyone sees the players moving together.

Why are Brass Instruments Placed Next to Percussion?

They can project sound more easily than woodwinds and strings, so they are placed together in the back of an orchestra.

Percussion makes sounds by having a player hit an instrument. They can produce loud sounds easily because they don’t need to create sound through moving air.

Even though the brass section is considered a part of the wind family, they can be incredibly loud. Trumpets especially can create a bright, piercing sound that is heard above the entire orchestra.

Since horns and percussion are easy to hear, placing them farther away from the listener helps make other quieter instruments heard. If they were placed in the front, they would drown out other instrument voices.

The brass and percussion section provide the backbone of the orchestra.

Even though these instrument groups don’t get the melodic parts, they still have an important job. Most brass instruments are lower-pitched and serve as the bass and harmony for an orchestra.

The percussion section is similar because it does not play the melody either. Instead, percussionists keep the tempo of the orchestra. Since both the brass and percussion are the support system of the music, they sit together in the back.

What are the Reasons For Determining an Orchestra Layout?

The orchestral layout commonly used today places similar sounding instruments together, with louder instruments in the back.

Violins normally sit to the left of the conductor, cellos and double basses sit to the right, with woodwinds seated directly behind the strings. The brass and percussion sections are the furthest back.

This is called the “traditional” layout, but it did not exist until about a hundred years ago.

Throughout the 18th and 19th centuries, instrument sections were separated based on their role in the music. The entire violin section was not seated together, with the first and second violins sitting opposite.

Composers like Gustav Mahler and Wolfgang Amadeus Mozart wrote more conversational compositions. Because of this, the seating arrangement of orchestras was not focused on sound projection.

Instead, instrument sections that “talked” to another would sit on opposite sides of the orchestra.

The current seating arrangement was developed in the early 20th century.

Leopold Stokowski was responsible for this because he experimented with where instrumentalists were placed. He was the conductor of the Philadelphia Orchestra and strove to find the best way to present music to an audience.

Stokowski claimed that this seating allowed instrumentalists to hear one another more easily, and most current conductors agree.

This organizational system also benefits the instrumentalists. Players listen to the lowest voice for intonation, and it is much easier for them to listen back to the lower-pitched brass.

With this setup, performances are much more balanced.

It is efficient to organize an orchestra based on sound projection. This system allows orchestras to have a unified sound without any instrument being more noticeable than another.

Have Orchestras Tested Out Other Setups?

Although many orchestras use this layout, some choose other ways to organize their instrumentalists.

Even as far back as the 17th century, composers experimented with different ways to place instrumentalists. They often wanted to create unique experiences for the listener.

Adrien Willaert and Giovanni Gabrieli took advantage of having a large cathedral and scattered instrumentalists. With this new layout, composers could write music with an echo effect, rarely done before in orchestral music.

Over the following centuries, orchestra layouts became uniform. This was to balance sonic levels and make sure that the audience heard a nice, balanced sound.

Charles Ives was a more modern composer who experimented with the organization of an orchestra.

Ives created a piece of music called The Unanswered Question, where there were three different groups of instruments spread out in a room. Each group could not see another group, making the music dissonant and echoed.

In 1966, Iannis Xenakis wrote a piece of music where the players were sitting in the audience. This created an interesting listening experience for the audience because they heard the sound in a much different way.

Most orchestras prefer a normalized layout with the brass behind the woodwinds and strings. However, it depends on which piece of music they are playing. Some composers experiment with orchestra layout to create a new experience for the listener.

In general, orchestras are seated according to the projection of each instrument.

This allows orchestras to be well-balanced, with every instrument section blended to make a unified sound. This is a fairly new technique and does not have to be used in all orchestras, but most choose this organizational system.

There are many rules that people follow with music, but some musicians and composers break these rules to achieve a different effect.

Conductors and composers can experiment as much as they want! Modern music frequently changes the ways that instrument groups interact. This makes sure that music doesn’t get boring.

An Odyssey of Unusual Orchestral Layouts

Why are Orchestras Arranged the Way They Are?