Many people can recognize a Bb trumpet.

This is the most common trumpet and is regularly played by beginner, intermediate, and advanced players. However, there are many other instruments in the trumpet family.

Here are Some Similar Instruments to the Bb Trumpet:

Although Bb trumpets are the most recognizable trumpet, there are many instruments in the trumpet family. The piccolo trumpet, cornet, flugelhorn, pocket trumpet, C trumpet, D/Eb trumpet, bugle, bass trumpet, and french horn share similarities with the standard Bb trumpet 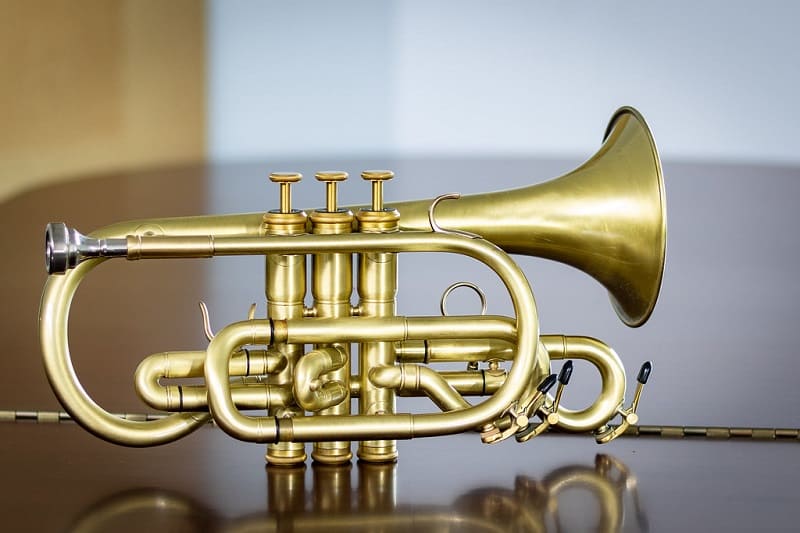 Piccolo trumpets have a similar construction to Bb trumpets, except they might have a fourth valve and sound an octave higher.

They will sound this way because their tubing is half the length of a Bb trumpet.

They are used in some modern music but perform Baroque music very well. Piccolo trumpets are a great substitute for a natural trumpet, which is a Baroque version of the modern trumpet.

Piccolo trumpets are built to have two interchangeable leadpipes. This way, players can tune their trumpet to either the key of A or Bb.

Baroque music is frequently written in the key of D, and this is much easier to transpose on a piccolo trumpet pitched in A rather than a Bb trumpet.

Since a piccolo trumpet has half the tubing length of a Bb trumpet, you won’t need much air to play notes.

Piccolo trumpet players need to train themselves to limit their air intake.

Although many beginner trumpet players start playing on Bb trumpets, some will learn on a cornet.

This is because cornets are easier to hold but will have a sound similar to a normal trumpet.

Cornets have the same length of tubing as a Bb trumpet. The only difference is that the tubing of cornets will be wrapped more tightly together. This makes the instrument appear smaller, although it will weigh the same.

For beginners, a Bb trumpet might be too long to hold comfortably. Cornets are slightly smaller, so they are held closer to the body.

With a cornet, players can learn proper technique without exhausting their arms.

A cornet will sound more round and mellow. This is a result of its conical bore. Unlike a Bb trumpet, a cornet’s tubing will gradually increase in size from the mouthpiece to the bell.

Although you might see cornets be used alongside Bb trumpets in ensembles, Bb trumpets are much more common.

A flugelhorn is more similar to a cornet than a Bb trumpet. Like cornets, flugelhorns have a conical bore.

However, a flugelhorn has many other features that distinguish it as its own instrument.

With a wide bore and a large bell, a flugelhorn has a very dark and mellow tone. This is a big contrast to the brassy, edgy sound of a Bb trumpet.

While Bb trumpets are successful in playing fanfares, flugelhorns are mostly used for melodic passages.

Because of this, flugelhorns tend to be more responsive and allow a player to move air more freely.

There is less resistance with a flugelhorn so players tend to make the mistake of overblowing.

Especially when transitioning from Bb trumpet to flugelhorn, players have to use less air to play well.

The pocket trumpet is more of a novelty instrument.

They are rarely played in ensembles, being used primarily for personal practicing.

Pocket trumpets are the same as Bb trumpets, except its tubing is wrapped much tighter. It was designed to have the same sound as a Bb trumpet with a much smaller size.

This model was made for cosmetic purposes rather than to achieve a unique sound. When traveling, a pocket trumpet might be useful in saving space.

However, players don’t use pocket trumpets as their primary instrument.

Pocket trumpets have some issues in their construction. Their small size impacts their intonation and valve quality.

A Bb trumpet will have a much higher quality in construction and tone.

Many pocket trumpets are made and sold cheaply. They won’t be great quality instruments.

Players generally buy pocket trumpets for a fun instrument to add to their collection.

C trumpets are built to be a little smaller than a Bb trumpet and a whole step higher.

They are used more often in orchestras than in other ensembles.

A C trumpet has a very bright, penetrating tone. A C trumpet would do a great job when you need your sound to cut through the rest of an ensemble.

In comparison, a Bb trumpet has a more mellow sound.

Its smaller size allows trumpet players to have a bright, clear sound while playing in the key of C.

With this new key, a C trumpet can play music without transposing. Playing a C on piano will sound the same as a C on this trumpet. On a Bb trumpet, playing a C will sound like a Bb on piano.

Bb trumpets have slightly better intonation. This usually isn’t a problem, as most trumpet players who buy a C trumpet are professionals.

When Bb and C trumpets were invented, it opened up to create trumpets with different keys.

Because of this, we now have D and Eb trumpets as well.

The D trumpet was created in the Baroque period and added a more bright, piercing sound in ensembles. These trumpets can often hit notes that no other instruments cannot.

Their sound is so piercing and distinctive that most composers do not include them within their music.

D and Eb trumpets have a slightly different construction to allow them to have different keys. They are modified with additional tubing or an extra valve to achieve this goal.

Although these trumpets aren’t often seen in ensembles or solo work, they can add a distinctive tone to a piece of music.

For example, the D trumpet is most famously heard in Handel’s Messiah.

Before valves were invented, trumpet players used their air and embouchure to change notes.

A modern-day version of this trumpet is the bugle. This instrument looks similar to a Bb trumpet, except it has no valve system.

Bugles were created for military purposes. The army used bugles to created signals for their infantry, and they are still used today within the military.

Because it has no valves, bugles can only play the harmonic series. This means that they can play certain notes but can’t play the full chromatic scale.

Modern Bb trumpets have valves for added dexterity and range.

The bass trumpet is a unique instrument in the trumpet family.

Although it is defined as a trumpet, it is more comparable to a trombone because of its timbre and range.

Bass trumpets sound a sixth, ninth, or a full octave below Bb trumpets. They can be made in the key of C, Bb, or Eb.

You can find bass trumpets with either three or four valves. The fourth valve allows bass trumpet players to extend their range even lower.

The mouthpiece size of a bass trumpet is between a Bb trumpet and a trombone. Because of the large mouthpiece, trombone players frequently play bass trumpet parts in ensembles.

Although the french horn looks very different from a trumpet, they have similarities in sound and range.

Out of all the brass instruments, these two are the most comparable.

French horns can play a low F#2 to a C6. Trumpets have a similar range, being able to play F#3 to D6.

Both the trumpet and the french horn are capable of producing intense, piercing sounds. If a piece of music needs an energetic, powerful section, you’ll likely hear this part played by either the trumpets or french horns.

You might not realize that there is more than one kind of trumpet.

The Bb trumpet is the most well-known and easily recognizable version, but many other trumpet models have unique characteristics, construction, and tone.

If you are a beginner trumpet player, you will likely learn on a Bb trumpet or cornet. There’s no need to worry about the different trumpet types on this list yet.

For more experienced players, you can branch out and try different types of trumpets.

Playing unique trumpets will improve your trumpet playing, so feel free to play as many as you can!

Types of Trumpets in the Trumpet Family

A Guide to the Different Types of Trumpets