If you are interested in playing the bugle over the trumpet, it is important to understand their differences and their challenges.

The trumpet is more popular while the bugle has a traditional and distinct sound.

The trumpet is much more complicated than a bugle and is used in a more professional musical setting. The bugle is used in Boy Scouts and the military without much musical background, though it can be used for music. The trumpet has valves to learn while the bugle does not. 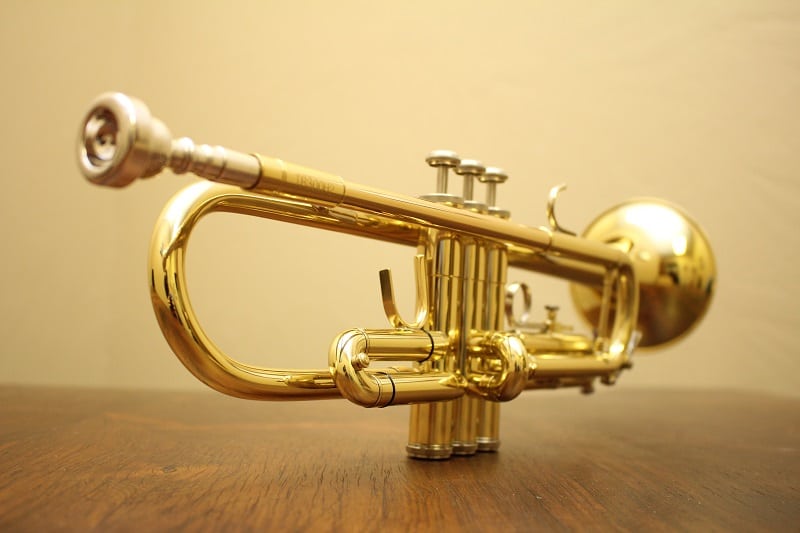 Is the Trumpet or the Bugle Easier to Play?

To fully answer this question, it is imperative to know the specifics of each of the two instruments and then see how they are differently played:

The bugle has the most uncomplicated look of all the brass instruments, as it lacks both valves and pitch-altering implements.

The bugle is, in essence, a continuous spiraling tube.

It is worth noting that a bugles tube spiral shape is not a requirement. It’s only shaped that way for convenient carrying and space utilization.

To play the bugle, you need to have a perfect Embouchure to produce the sound while also controlling the pitch.

It is a term used to refer to the use of a player’s teeth, tongue, and lips when playing a musical instrument.

Essentially, you will need to move your lips and tongue constantly without causing any pressure on your muscles to produce a clear sound on the bugle.

Now the trumpet is more complicated than a bugle.

A regular trumpet also has three hooks and wrings on it.

You will have to learn your way around the three valves and the mouthpiece to play the trumpet.

Playing the bugle is highly taxing on your embouchure, whereas playing the trumpet is not as hard.

However, the trumpet has valves, which are used to control the pitch when playing different notes. Mastering using these valves has proved a considerable challenge to many.

Thus, it is safe to say that learning to play the bugle may be easier than the trumpet.

Which One of the Two Instruments is More Popular?

An instrument’s popularity is usually gauged by assessing some critical factors, such as their famous history and professional players, where they are most used, and how many bands use their instrument consistently.

Here are some of the best Jazz players who play the trumpet:

These players can also play the bugle, though they are well known for their abilities on the regular trumpet.

In terms of being played by famous musicians, the trumpet wins over the bugle without a doubt.

What Bands or Orchestras use Them?

The bugle was mainly used during wars to announce or warn of impending danger.

In contrast, the Trumpet has been majorly used for musical purposes, though it has been heralded as the sound of war before.

Ever since valves were added to trumpets, composers have included trumpets within their compositions to provide a striking, new addition to the upper voices.

Their ability to perform impressive runs and leaps bolsters the intensity of any piece of music.

Many famous composers have featured trumpets in their scores, including but not limited to Gustav Mahler and Richard Wagner. Countless renowned compositions would not be the same if not for the distinctive sound of a trumpet.

Because of its easily identifiable sound, trumpets can be used in any music.

They are most commonly used in classical and jazz ensembles. Many solos, chamber music, and large orchestral works frequently showcase trumpet players.

Bagels, however, are mainly used in the military or the Boy Scouts. They are not considered particularly musical, though you can sure try to use them that way.

Learning either the trumpet or bugle requires hours of practice and years of training to become a professional.

However, if you want to learn to read music and play in a marching band, it shouldn’t take you years to master it, but rather several months of trying.

Depending on your goals with the instrument (professional or casual), the amount of time will vary for both.

The Hours of Practice:

The human mind is wired to remember that which is often fed to it.

That is where the number of hours you put into practice comes into play.

Professional players, people who have extensive mastery of the instruments they play, have been known to put in many hours in practice.

Freddie Hubbard stated that he practiced for more than eight hours a day. That is roughly forty hours a week!

Don’t be scared; you won’t have to put in that much time in practice; Freddie was a world-renowned performer. He had to stay atop his game.

On the other hand, you can make it a point to practice for two hours every day where shorter sessions with small breaks are encouraged.

Doing so allows you to rest while also allowing your brain to store the new information and constantly re-enforcing it.

In all human endeavors, mindset is one of those factors that determine whether one will succeed or not.

Developing a mindset that you will face a considerable challenge when practicing but are more than capable of handling it is vital.

Also, acknowledging that it will take some time to learn an instrument will make you more determined and consistent in your practice sessions.

A beginner-level trumpet currently starts at $300, while a beginner-bugles price stands at $169.

The price differences between the bugle and the trumpet aren’t huge, though it is evident that the trumpet is more expensive.

Tips to Help you Choose Between Trumpet and Bugle:

You may have realized that the bugle and the trumpet are used on different occasions.

The trumpet is a good choice if you plan to pursue a professional career, as it plays more types of music than the bugle.

If you are still undecided on which of the two to get, you can try renting out the instrument first!

The renting process allows you to test and see whether you want that instrument or not since it offers you a feel of what playing either the bugle or the trumpet feels like.