Cornets are widely preferred over trumpets within brass bands.

Although they look similar, each brass instrument has its own sound. Cornets and trumpets are used for different types of ensembles.

These rules are occasionally broken, but it’s good to know which instruments are ideal for a specific sound:

Why are Cornets Used Instead of Trumpets in Brass Bands?

Cornets are more suited to brass bands because of their timbre. Brass bands prefer a more unified, blended sound. With the warm tone color of a cornet, they can more easily blend with the tone of tubas, trombones, euphoniums, and tenor horns. 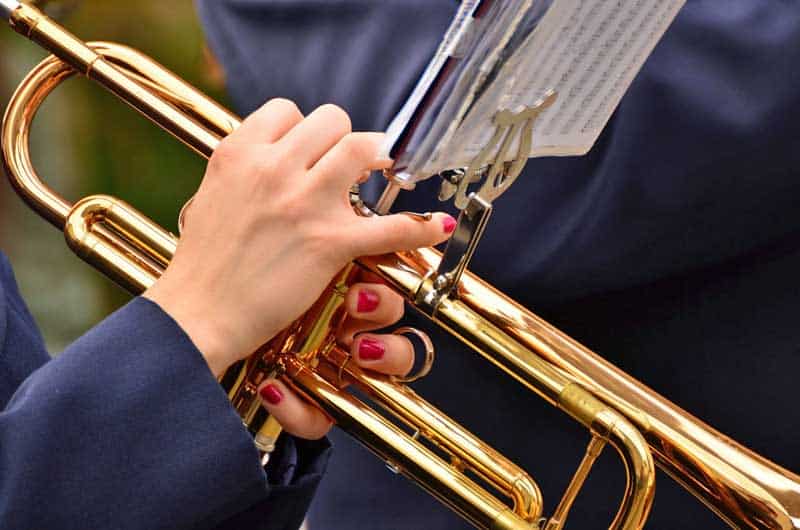 What Types of Orchestras Use Trumpets?

Trumpets are more versatile than cornets, being used for various orchestras, jazz bands, and even popular music.

In symphony orchestras, trumpets have been used for fanfares or other dramatic moments, as their bright tone can cut through the sound of other instruments in the orchestra.

Ever since valves were added to trumpets, composers have included trumpets within their compositions to provide a striking, new addition to the upper voices. Their ability to perform impressive runs and leaps bolsters the intensity of any piece of music.

Many famous composers have featured trumpets in their scores, including but not limited to Gustav Mahler and Richard Wagner. Countless renowned compositions would not be the same if not for the distinctive sound of a trumpet.

Because of its easily identifiable sound, trumpets can be used in any music.

Since trumpets are the most versatile instrument, they are seen in various orchestras, including small chamber orchestras, symphony orchestras, and philharmonic orchestras.

They are most commonly used in classical and jazz ensembles. Many solos, chamber music, and large orchestral works frequently showcase trumpet players.

Although they are usually noticed for their distinctive timbre, trumpet players can adapt their sound using mutes. This allows them to vary the production of sound and be more versatile in playing different styles.

In jazz ensembles, trumpets are given a chance to improvise solos.

They frequently display a brighter, more edgy tone to fit the unique genre of jazz.

Do Any Brass Bands Today Use Trumpets?

More traditional brass bands use cornets instead of trumpets.

This allows all the instruments in the ensemble to have a conical bore and produce a similar timbre.

These brass bands are typically found in the United Kingdom, where this type of ensemble originated. Tradition is highly valued there, so cornets are more widely used.

In the United States, trumpets are much more popular than cornets.

Cornets have a much smaller market in the US, so they are less likely to be bought and played. Although the tone quality won’t be as blended with a trumpet, they can be used in small ensembles like brass bands.

That being said, the popularity of traditional brass bands is rising.

In Australia, Holland, Asia, and America, musicians have formed brass bands and increased the popularity of cornets.

Has Trumpet Been Used in Brass Bands Back in the Day?

Modern brass bands can be traced back to nineteenth-century England.

During the Industrial Revolution, there was an increase in raw materials to make more instruments quickly and cheaply.

Employers wanted to keep workers entertained in their spare time, so they supported the formation of brass bands. Soon, they were supported by their hometowns.

People had local pride for their brass bands.

Traditionally, trumpets were not a part of brass bands:

When brass bands developed in the United States, they started their own tradition and style.

In New Orleans, brass bands involved a variety of instruments.

Since it was a blend of European military music and African folk music, these brass bands included trumpets, clarinets, saxophones, and sousaphones.

Balkan brass bands use trumpets instead of cornets:

The Balkans developed a fusion of military music and folk music for brass bands, evolving from the rigid tradition of the British.

As brass bands continue to spread to new regions and countries, different cultures will influence how these ensembles function.

The traditional brass band is celebrated for its sonority and long-lasting connection to its heritage, but new styles and techniques should be welcomed.

What Exactly is the Difference Between Cornets and Trumpets?

There are a few major differences that contribute to their distinctive timbres.

Most musicians will play both cornet and trumpet because they are both Bb instruments. They also have similar construction.

This makes it easier for instrumentalists to make the transition from trumpet to cornet or vice versa.

By looking at both instruments, you’ll notice a difference in bore shape.

All brass instruments are constructed from brass tubing. What makes every instrument sound different is the width and length of the tubes.

The trumpet has a cylindrical bore, and the cornet has a conical bore.

Since the trumpet has a cylindrical bore, its tubing does not change in width until it flares into a bell.

In contrast with this, a cornet’s conical bore indicates that the tubing changes in width, widening halfway until it flares further into a bell.

The most noticeable difference between cornet and trumpet is the way it sounds.

The differences in bore shape change the tone color of each instrument. A trumpet has a brighter, more piercing tone because of its cylindrical bore.

A cornet’s timbre has less edge. Its tone color is much softer and muted due to its conical bore.

Brass bands have a longstanding tradition of having a warm, blended sound.

This is generally not achievable with the use of trumpets.

Cornets are the best option when forming a brass band, as they have a soft, warm timbre. If you’re thinking about starting your own brass band, it’s important to know the differences in sonority when instruments are played together.

Making the right choice in instrumentation can heavily influence the success of your ensemble.

Cornet vs. Trumpet: What are the Differences?

An introduction to Brass Bands