Trumpet and trombone are two of the most popular brass instruments out there.

Both are pretty accessible to beginners, but they each have their own challenges.

In this article, we’ll go over what makes each instrument unique and figure out which one is more difficult to learn:

Generally speaking, trombones have a bigger mouthpiece that’s easier to blow into but are difficult to master because of the slide. On the other hand, the trumpet is more intuitive and easier to hold, but it can be more challenging to buzz into the smaller mouthpiece. 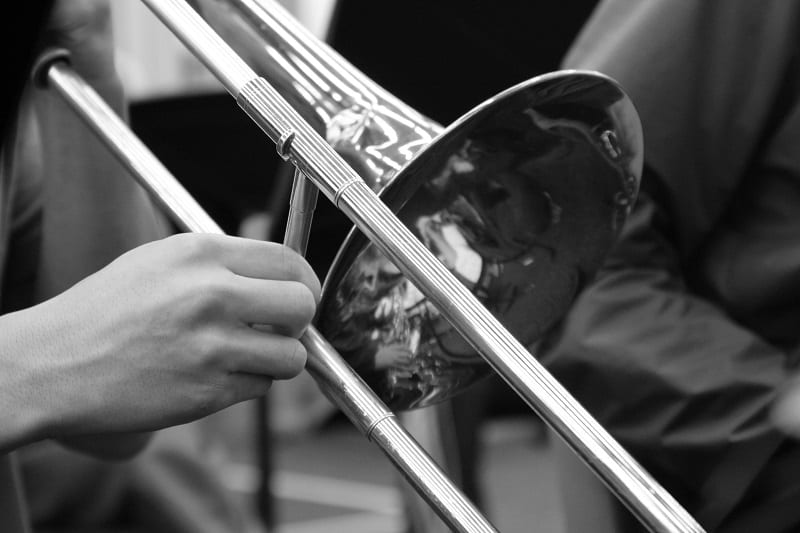 While both instruments are usually featured together in bands and orchestras, trumpets are a lot more popular.

There are several contributing factors to its popularity:

Part of the reason is the size of each instrument.

Trumpets are small, easy to hold and don’t require any changes in posture to play. They’re also easier to transport and put in storage.

Trombones are much bigger and require moving your arm to different slide positions, which can be difficult for some beginners.

Plus, trombones often come in large awkwardly shaped cases, making them difficult to carry around and store.

The trombone comes in a few different pieces and requires assembling and disassembling it whenever you want to play it or put it away.

This can take time and is a barrier to playing if you only have a few minutes to practice.

The trumpet is smaller and doesn’t require any assembly to put together. Just pop a mouthpiece onto the instrument, and you’re ready to start playing.

A lot of what makes the trumpet more popular is the ease of playability.

Although the mouthpiece might be hard to buzz into at first, the trumpet requires less air to play and get a good sound out of it.

Since the trombone is a bigger instrument, getting a big, full sound will take more air.

For more information, check out our article Here’s Why The Trombone Is The Hardest Brass Instrument To Master!

Trumpets, like most other brass instruments, use valves to change the pitch.

Most people will find pressing down buttons on a trumpet more intuitive than a trombone slide. The trombone is unique among almost all instruments because of the slide.

Visually, it’s really cool to look at or watch someone play, but there are some disadvantages to trombone slides:

Because of these things, it usually takes more time to master the trombone, but once they get to a high enough level, trombone players have a lot of fun playing their instrument.

How Long Does it take to Learn Each Instrument?

With either trumpet or trombone, you can get to a basic playing level within a few months.

The trombone might take a bit of extra time if you’re trying to teach yourself.

You have to put in consistent effort to get to where you want to go.

Similarly, a Yamaha Xeno professional trombone is only a few hundred dollars more than a Xeno series trumpet.

You don’t have to spend thousands of dollars on a trumpet or trombone. If you’re a beginner, you can get a good quality beginner-level instrument for only around $200-500.

It can be overwhelming to figure out which trumpet or trombone to buy with so many options to choose from. See which brands we trust and recommend to beginners.

8 Tips to Help you Choose Between Trumpet and Trombone:

If you’re still hung up on which instrument you want to play, here are some extra tips to help you decide between trumpet and trombone:

If you have the opportunity, try playing both instruments before you make a decision.

You don’t have to know to play them just yet. Just try making a sound and see which one resonates with you more.

First, decide how much you’re willing to pay for an instrument.

Trumpets and trombones come in a wide range of prices depending on which brand you go for and which models you choose from.

If you want to save some extra money, it’ll probably be easier to find a used trumpet that’s in decent shape than a used trombone.

3. Think of Yourself in a Group Setting

Do you see yourself playing in a band or orchestra?

Depending on what you like to do and how you interact with a group, one instrument might better match your personality.

Do you like being recognized, or do you prefer supporting and lifting others? Trumpets will often get the melody in a group setting, while trombones often play more of a background role.

If you see yourself starting your own group, which one do you think you’d like to play more?

You want to learn an instrument so you can play the awesome music you like.

Trumpet and trombone can be heard in almost any style of music and are often featured together.

Think about the music you like to listen to and the artists that play them. Are you a fan of Louis Armstrong, Miles Davis, or Chuck Mangione? Then the trumpet may be your thing.

Whoever it is, choosing the same instrument as an artist who inspires you is a great way to start.

No matter what you pick, learning an instrument is a big-time commitment.

Trumpet lends itself more to being a “pick up and play” type of instrument, while trombone has a bit more of a learning curve.

Do you have shared walls with the apartment next door?

Both instruments can be very loud, so be considerate of your neighbors or housemates when playing.

Trumpets play in a higher range and therefore have a more piercing sound that can bother other people. Trombones can be a little bit more forgiving in this situation.

If your house is pretty isolated from your neighbors or you have a basement, either instrument shouldn’t be a problem.

So have fun with it!

7. How Much Space do you Have?

Trumpets are smaller and more compact.

They also come in a case that’s more square-shaped, so they’re easier to store and put away.

On the flip side, trombones need more space to play because of the slide. The length of the trombone will depend on what slide position you use, so make sure there’s plenty of room in front of you when you play.

Trombone cases are also bigger and have an obtuse shape, making them a bit more awkward to store.

The trombone is going to be heavier to hold and require more air to play. Moving your entire arm to reach different slide positions will also be difficult for some people.

Trumpets are going to be a little less demanding. While buzzing your lips into the mouthpiece might be hard at first, it’s going to need less air and less body movement to play.

While trumpets and trombones are popular brass instruments, the trombone has more of a learning curve and might not be a good fit for certain people.

That said, if you want to learn the trombone, you’ll be more motivated to play it and have a good time with it.

It’s ultimately up to you to decide which instrument to play. If you’re excited to play it, you’ll have more fun with it, and you’ll stick with it longer.