The trumpet has a vital role within any band or orchestra that requires it.

With a strong sound, incredible technique, and difficulty to play, the trumpet’s role is crucial to accentuating a piece, reaching the climactic moment, or helping to keep the rhythm for everyone else.

That being said, depending on where you play, your role as a trumpeter could be very different:

This is the Trumpet’s Place in an Orchestra:

The trumpet is usually placed in the brass section between the French Horns and Trombones in the back-right part of the orchestra. It is used as a loud and distinct sound that helps carry a piece and keep rhythm. There are typically 2 to 4 trumpets in a classic orchestra. 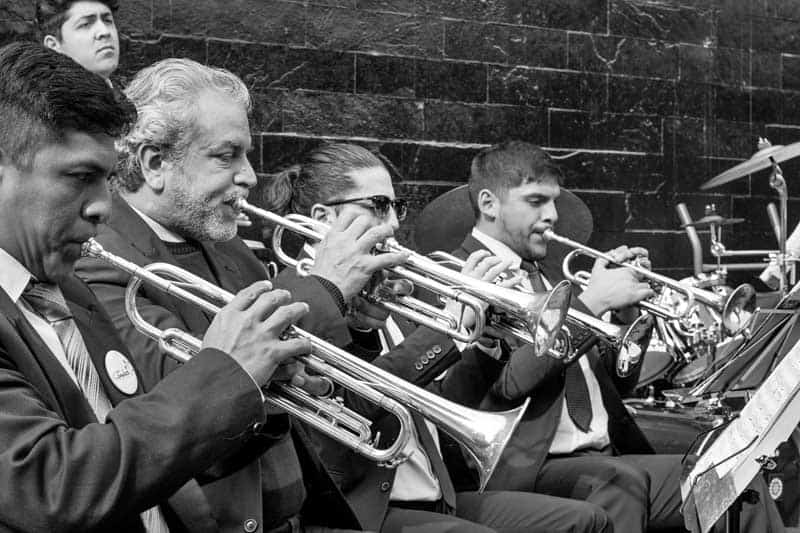 What Types of Orchestras Use Trumpets?

The trumpet is one of the only musical instruments that you can find in nearly every Western style of a genre of music, including classical orchestra, rock ‘n’ roll, jazz, salsa, or pop music.

This means that you can find trumpets outside of a concert hall and in more casual settings, although most brass bands will use a cornet instead of a traditional trumpet.

Jazz ensembles will usually use a traditional trumpet rather than a cornet and also include trombones.

The trumpet in a classical orchestra helps give it a strong sound that most people are familiar with. There are eleven to fourteen brass instruments in any given orchestra, depending on resources and need.

In a typical orchestra setting, there are usually between two to four trumpets at a time. They will either harmonize or play the melody of the song, and they help to keep rhythm.

Because of its distinct sound, the trumpet will often be used during the piece’s climax or to help emphasize a moment in the music.

Where Do Trumpet Players Sit in the Orchestra?

Trumpet players sit in the brass section of the orchestra.

The brass section is behind the wind instruments, with French Horns placed first to help transition between winds and brass.

Then there are trumpets, which are next to the trombones.

Brass is usually in the back-middle part of the orchestra, as (apart from the percussion section) they are the loudest section of the group. By placing them in the back, their sound can carry without drowning out the other instruments.

Though they are in the back of the orchestra, the brass section is panned to stretch out across the back. This helps give a surround-sound feeling to their music.

Trumpet players are ultimately squished between the French Horns and the trombones.

What Part of the Orchestra Does the Trumpet Belong to?

Trumpets belong to the brass section in the orchestra.

The brass section in most orchestras consists of:

Concert bands and jazz ensembles will usually have more or fewer brass instruments depending on the need or the songs involved in the performance.

For example, concert bands can also include (though it is rare) piccolo trumpets, flugelhorns, or Wagner tubas. Cornets are most commonly used in brass bands and concert bands as well.

The brass section in an orchestra or musical group creates a loud, distinct sound that helps carry the musical piece for the other instruments. Basically, they help to keep the rhythm and emphasize the climactic parts of the music.

The instruments of a brass section are almost always made of metal and are usually played by pressing your lips to the mouthpiece and creating a buzzing noise, also called an embouchure.

Do Trumpets Always Get to Play the Melody?

Trumpets will not always play the melody, but it is common for them to do so.

Violins and flutes carry most melodies within a classical orchestral piece.

Therefore, trumpets can play melodies, but they will also play harmonies and help keep the rhythm of the piece. Depending on the song choice, the trumpets will either be more prominent or more of a supporting instrument to give way to other instruments.

The sound of the trumpet is loud and distinct, so it is essential to use them to your advantage, not your detriment.

How Many Solos do Trumpets get in Orchestras?

There are incredibly famous trumpet solos in jazz ensembles and brass bands (though usually, it is a cornet, not a trumpet that is played in a brass band).

Louis Armstrong’s famous “West End Blues” is a great example of the powerful and amazing sound that a trumpet can make. “So What” by Miles Davis is another fun and powerful song that millions have listened to again and again through YouTube or on old records.

However, within the orchestra, there are a few lesser-known trumpet solos for the beginner player that you might want to look into.

For example, Joseph Haydn’s “Trumpet Concerto” is considered the best trumpet solo that a trumpeter could ask for. Backed by gorgeous strings and gentle music, the trumpet stands out clearly and beautifully without being overwhelming.

Paul Hindemith’s “Sonata for the Trumpet and Piano” is a much more difficult piece. Written at the beginning of the Second World War, it is somber, sadder, and a little dark sounding.

It is difficult to say how many solos a trumpeter will get when playing in an orchestra.

Depending on the music chosen, the theatrical show that you are performing for, or the skill level of the musicians (middle school to professional), there are likely to be fewer or more solos.

That being said, there are many great songs that were made for the trumpet, like the ones we spoke about before.

The Trumpet is an Important Part of the Orchestra:

As we’ve stated, the trumpet is an incredible instrument that is crucial to making a piece of music flow.

Whether they are playing the melody, harmonizing, keeping rhythm, or standing up for a solo, trumpeters are a huge part of what makes both classical and modern music as powerful and beautiful as it can be.

Not only were they used to sound alarms or signal wartime throughout history, but trumpets have also evolved to become the most versatile instrument used in almost every genre in the Western world today!

If you are just starting out with music and are considering the trumpet, you should definitely go for it!

Remember, the trumpet is rather difficult to learn, but it is so rewarding once you begin to master it. You may even get a solo out of it!

An Introduction to the Orchestra – The Brass Section

INSTRUMENTS OF THE ORCHESTRA | PDF