Trumpets have one of the most iconic sounds in the entire orchestra.

Although they may not be the loudest by decibel in the orchestra, the trumpet is very easy to pick out when you are listening to a piece of music or band.

This is because the resonating sound from the trumpet’s bell is so distinct that it creates a great impact even if it is being played more quietly.

Here’s How Loud Trumpets Are:

Although the trumpet is a lower decibel than the trombone or clarinet, it is easier to hear or distinguish from its neighbors in an orchestra concert. The trumpet peaks at 110 decibels and can be played as low as 50 decibels. It is considered one of the loudest in the orchestra. 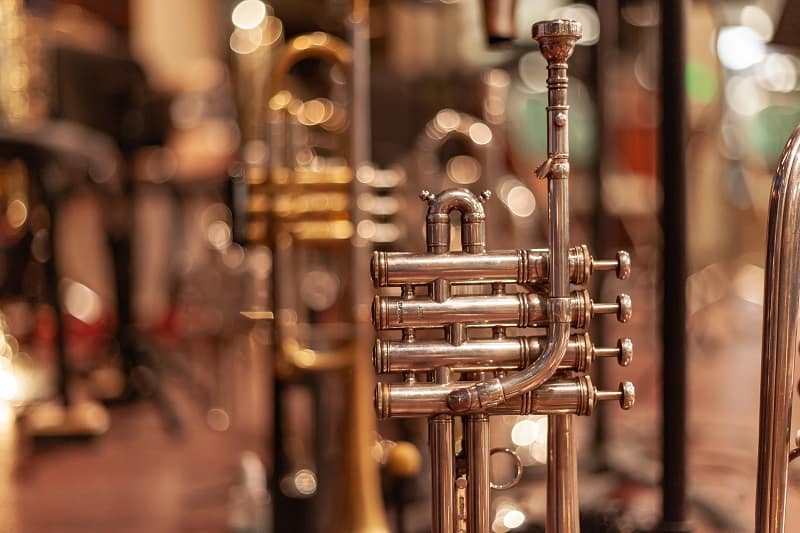 What Makes the Trumpet so Loud?

The vibrating columns of air within the trumpet, and the buzzing of the player’s lips (also called “embouchure”), resonates throughout the instrument and creates either a high-pitched sound or a lower-pitched sound depending on the tubing length.

Because the tubing length of a trumpet is shorter, the sound is higher pitched and more distinct.

When a trumpeter plays, they are pushing a lot of air with great force through a small space which reverberates and sort of explodes outward through the bell, creating a loud and resonating sound.

This is louder than something like a piano because the striking of the keys is only ever going to be so loud – even if you strike it really hard. This is because a piano can only really go as high as about 85 decibels with the force of pressing on the keys.

But trumpeters can push a lot of air through the tubing of their instrument in order to make an incredible noise depending on the player’s breath and skill.

This is within the control of the player and generally can get pretty loud very quickly.

How Loud are Trumpets Compared to Other Instruments?

Trumpets are pretty average compared to the other instruments within the orchestra.

Most trumpets will reach a decibel level from 80 to 110, with 80 being the quieter side of the trumpet’s noise level.

To put this in perspective, a normal conversation between two people is roughly 60 decibels, while a large truck is 80 decibels. A hairdryer near your head is about 90 decibels and can be hard on your ears.

A Turbo-fan aircraft at takeoff or a live rock concert have both been measured at 110 decibels of sound. This means a trumpet can be as loud as an aircraft at its loudest!

Compared to other instruments in an orchestra, the trumpet isn’t necessarily higher in decibel than the others:

This is very loud for the human ear to stand for a long time, but in short bursts – like at an orchestra concert – it is bearable.

The loudest instrument on Earth, according to Guinness World Records, is the Boardwalk Hall Auditorium Organ, which through its Grand Ophicleide (the most powerful organ stop in the world) it can reach 130 decibels of sound.

According to the Wikipedia entry on the Grand Ophicleide, it is described as having “a pure trumpet note of ear-splitting volume, more than six times the volume of the loudest locomotive whistle.”

Is the Trumpet Considered “Loud” then?”

Even though the trumpet doesn’t necessarily have the loudest possible decibel in the orchestra, that doesn’t mean it isn’t considered a loud instrument.

In fact, many have considered the trumpet to have such a distinct, piercing sound that it still cuts through the noise of all others in its section when played properly.

Therefore, the term “loud” which decibels help measure, is probably not the right term.

Instead, you might say that trumpets are more distinct, meaning that even when they are being played quietly, your ears are still able to find their sound the quickest.

How Do you Make a Trumpet Quieter?

You can definitely play the trumpet more quietly by using mutes or even electronics to prevent the sound from being too loud for others.

For example, if you wanted to practice trumpet at home but you have neighbors, you might want to get a mute. Trumpet mutes look like short bottles that are pressed into the bell of the trumpet which muffles the sound.

When you use a mute, the sound that your trumpet makes won’t be as pretty or clear as it would be without the mute, but it will be muffled and still allow you to practice the song you need to learn.

If you don’t want your sound to be interrupted, you can invest in a Yamaha SILENTBrass portable audio device.

The Yamaha SILENTBrass is basically an electronic mute (which still goes into your bell) and is attached to a mini stereo. That stereo has a port for your headphones so you can plug in, and this allows you to hear your own sound without bothering your family or neighbors.

Are All Trumpets Equally Loud?

Not all trumpets are equal.

The length of tubing will change the sound which could change the decibel measurement. For example, shorter-length trumpet tubing can make a sharper, louder, more piercing high-pitched sound.

A Bb trumpet is one of the more commonly used trumpets and therefore has a baser sound with a great amount of range. The C trumpet is pitched higher and is said to have a “brighter” sound, meaning more sharp and high.

However, the trumpet’s close cousin, the Flugelhorn, is more “swollen” and “softer” than the other trumpets in its family. This means it can be played more subdued and quieter.

On the other side of the spectrum from the Flugelhorn, the Piccolo trumpet is the smallest member of the trumpet family and is VERY high-pitched in Bb.

It is played at an octave higher than a regular Bb trumpet and it has an incredibly unique sound.

Not to mention that, depending on the musician, you can absolutely play the trumpet softer than your neighbor. Even if two people are playing a Bb trumpet at the same time, one musician can play it much quieter than the other if they try.

What is the World’s Loudest Instrument?

How To Practice The Trumpet Quietly