The trumpet is one of the most recognizable instruments. When elementary students choose their first instrument, most of them want to play the trumpet instead of other brass instruments.

However, trumpet playing was not always so popular. Several musicians influenced its reputation.

Let’s talk about who made the trumpet famous:

Here’s Who Made the Trumpet Famous:

Although the trumpet is one of the oldest instruments, it first became popular in the 20th century. Trumpet players like Louis Armstrong, Dizzy Gillespie, and Miles Davis increased the popularity of the trumpet with the rise of new music genres like jazz and bebop. 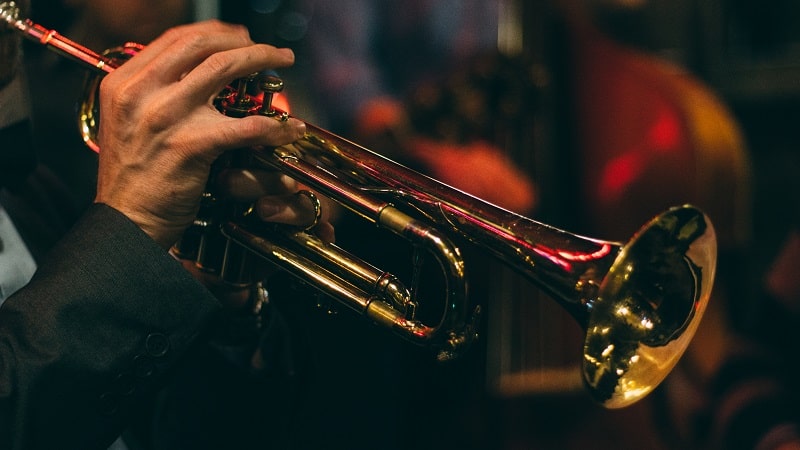 Who Was the First Famous Trumpet Player?

Even though trumpets have been around for centuries, the earliest record of famous trumpet players was in the 20th century.

Trumpet playing rose in popularity during this period with the creation of jazz music.

No one knows exactly who was the first person who popularized playing jazz trumpet, but one of the most famous jazz trumpet players of all time is Louis Armstrong.

Being born into poverty, Louis Armstrong didn’t expect to become famous, but he played a vital role in defining jazz.

Armstrong became popular in the 1920s and influenced the structure of jazz. He shifted the focus of the music from ensembles to improvised solo playing.

He was best known for his gravelly voice and ability to improvise.

What Did He Do Differently Than Previous Trumpet Players?

Louis Armstrong was a unique performer because he both sang and played trumpet.

He was great at scat singing and improvising on his trumpet.

Armstrong became popular during the Harlem Renaissance. This period of American history featured a community of African American cultural achievement that continues to influence artists today.

Unlike other trumpet players, Armstrong was a performer who crossed over into many different genres. He was an African American jazz trumpet player who became popular with white and international audiences.

He was in films, too. He starred alongside Grace Kelly, Frank Sinatra, Bing Crosby, and Barbra Streisand. For his song Hello Dolly, he was awarded a Grammy and was nominated three other times.

Both his singing and trumpet playing were innovative in the music community.

He had an underlying swing feel to his singing, incorporating beautiful melodies and scat singing. His trumpet playing had a bright and brassy tone, and his improvisational skills were innovative within the jazz genre.

Here is a live recording of Louis Armstrong playing the trumpet:

Generally, when people are asked to think of a famous trumpet player, they remember Louis Armstrong.

He remains relevant to this day, making the trumpet incredibly popular for many audiences.

Who Else Helped Make the Trumpet Popular?

Many other trumpet players contributed to the popularity of the trumpet today. Dizzy Gillespie and Miles Davis are two of the most well-known musicians on this instrument.

Dizzy Gillespie was not only a trumpet player but a composer and bandleader as well. He helped to establish the bebop movement.

Bebop, or just “bop,” is a style of jazz that has a faster tempo, fast chord changes, and more complex chord progressions. Gillespie was a part of ensembles that pioneered this style in the 1940s.

Gillespie’s trumpet playing was innovative and daring. Saxophone solos influenced his music, so he played fast, jagged melodies with precision. This was a much different style than the music played by Armstrong.

Here is a live recording of Dizzy Gillespie:

Gillespie was extremely charismatic, having great interactions with his audience. His great stage presence influenced his popularity, as well as the dexterity of his trumpet playing. He was easily recognizable because he had extremely puffed cheeks while playing the trumpet.

Even though Miles Davis learned from the styles of Dizzy Gillespie, he developed his unique style of playing the trumpet. Davis had an intimate tone and explored the middle range of his register.

Unlike the complicated, daring bebop style, Davis focused on lyricism. His solos were frequently simple, based on quarter notes. His bands developed a style that is now known as modal jazz.

In this live recording, you can see the differences in Miles Davis’s style. Compared to his predecessors, Davis played calmer music, being less wildly experimental.

Because Davis’s music focused on melody, it became extremely popular.

His trumpet playing was appealing to more people because it was more relaxed. Davis’s involvement in the jazz style continues to influence music today.

His album “King of Blue” was the highest-selling jazz album in the entire history of jazz music. Because he started experimenting with electrical instruments later in his career, a new jazz-rock style emerged.

This led to current popular music.

When Did the Trumpet First Become Popular?

The trumpet became wildly popular in the 1920s with the prominence of jazz.

In this time, technology developed that allowed instruments to be recorded. The trumpet was one of the first recorded instruments.

People developed new technologies that could record and videotape music performances, which spread the popularity of modern music. Previously, trumpets were used in classical music, which could only be heard in person.

With the emergence of recording studios, trumpet playing reached a wide audience across the nation and globally.

It continued to grow in popularity through the end of the 20th century.

Why Did the Trumpet Become So Popular?

As new styles of music began to be popular, the trumpet rose in popularity as well.

The trumpet served a vital role in these genres. Its brassy, loud sound and wide range made it distinctive.

These musicians are still remembered as the pioneers of modern music. Because they experimented with new musical styles, instruments like the trumpet moved from classical music to popular music.

What Music Styles Used Trumpets in the Old Days?

Metal trumpets have existed since 1500BC.

This is the farthest back that we can trace the origin of the modern trumpet. Before this, trumpets were made with animal horns and shells.

Early trumpets weren’t used in the same way that we currently use them. Instead of playing music, trumpets were normally played in the military and for some religious ceremonies.

Trumpets are loud and can project their sound extremely far. This is useful in the military, and armies would use them to relay messages across great distances.

These trumpets had a similar construction to a modern bugle. Both bugles and old trumpets do not have valves and cannot play a wide range of notes.

Throughout the Middle Ages and the Renaissance, the design of trumpets improved but still did not have valves. They were then used to make some music but had a limited range of notes.

Trumpets rose in popularity during the Baroque era. They were mostly used to play fanfares because of their bright, piercing tone.

In the 1800s, trumpets were made with valves. This allowed them to be used more frequently in all types of music.

They could then play chromatic notes, and more composers wrote trumpet parts into their scores.

The trumpet has not always been as popular as it is today.

Currently, many musicians across the world play the trumpet. Countless musicians want to walk in the footsteps of Louis Armstrong, Dizzy Gillespie, Miles Davis, or other pioneers of trumpet playing.

In the late 1900s, musicians become famous on a national or global stage because music could be recorded. This new technology allowed jazz, and trumpet playing, to become extremely popular.

A Short History on the Trumpet

A Brief History Of The Trumpet: The Origins and Evolution