If you want to play a brass instrument, you should consider the weights of various instruments. That way, you’ll know if you need to build more upper body strength to enjoy playing music.

Here’s How Much Brass Instruments Weigh:

Brass instruments weigh anywhere from 0.88 pounds (standard bugle) to 30 pounds (tuba). Along with the weight, the balance and center of gravity can affect how heavy a specific instrument feels to hold in the correct playing position. 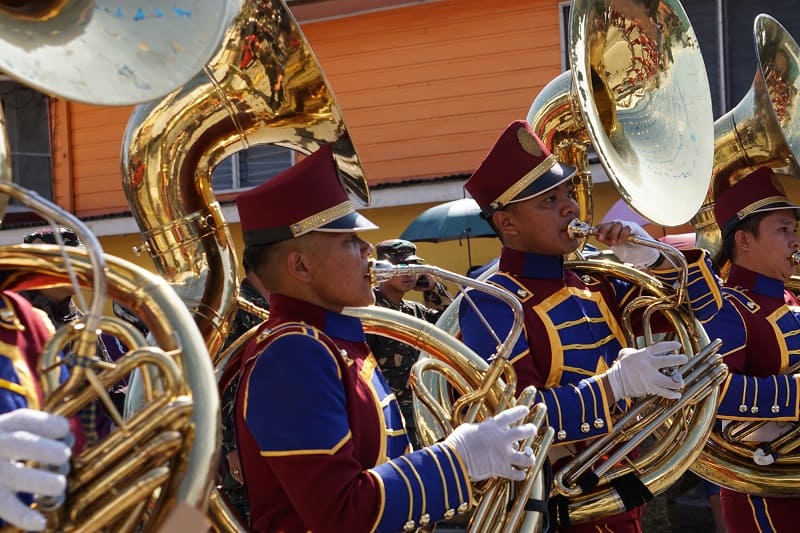 How Much Do Baritones Weigh?

Baritones weigh about 10 to 20 pounds on average.

When you first pick one up, it can feel lighter but feels heavier as you hold it until you build up the stamina to play it for long periods.

To help support this weight, you should be at least 12 to 13 years old, if not older. Younger children may not have the strength or the arm’s length to support the baritone.

How Much Do French Horns Weigh?

The exact weight can depend on whether it’s a single, double, or triple horn, and the material can also have a slight effect.

Many horns are made of brass, but some have a silver finish, which can add more to the weight. The instrument can also feel heavy at first due to the awkward position.

How Much Do Trombones Weigh?

On average, trombones weigh about three to six pounds. Meanwhile, a bass trombone tends to weigh between five and seven pounds.

While the weight isn’t that much, the balance can be awkward since most of the instrument sits before you. As you move the trombone slide, the center of balance can change, which is hard to get used to.

How Much Do Cornets Weigh?

Most cornets weigh between three and eight pounds, and the heavier ones tend to have silver plating.

However, you can also find plastic cornets that weigh just over two and a half pounds.

Cornets are one of the smallest brass instruments, so their center of gravity stays close to the player. That can make it easier to hold even a heavier model.

How Much Do Trumpets Weigh?

The average trumpet weighs about 2.2 pounds, but the exact weight can range from two to 2.8 pounds. It depends on the brand, materials, and other factors.

For example, gold and silver trumpets tend to be heavier than brass models. However, trumpets in C, D, and other higher keys may weigh less than your standard Bb trumpet.

Consider other types of trumpets and how much they weigh.

How Much Do Pocket Trumpets Weigh?

Pocket trumpets can weigh anywhere from two to five pounds, similar to regular Bb trumpets. After all, they’re the same as trumpets except more compact.

The compact design might make a pocket trumpet feel heavier than a regular trumpet. All the weight is in a smaller area, and the balance could be slightly different at first.

How Much Do Piccolo Trumpets Weigh?

Some models can weigh as much as eight pounds depending on the materials, the number of valves, and other factors.

You also have to consider using a piccolo trumpet that can play in A and Bb. When you use the A slides, your piccolo trumpet may weigh a bit more to account for the lower pitch.

How Much Do Euphoniums Weigh?

Euphoniums weigh between 9 and 11 pounds on average. Now, holding the euphonium can be a bit easier than some brass instruments since you hold it against your body.

That can help you distribute the weight better, especially sitting. You can rest the instrument on your leg, which may not feel as heavy.

How Much Do Alto Horns Weigh?

Alto horns weigh anywhere from 6 to 16 pounds. The exact weight depends on the brand, materials, and other factors.

It can also depend on whether you’re counting the case in weight. Like euphoniums, alto horns sit against your body, so they may not feel as heavy to hold as trumpets or trombones.

How Much Do Bugles Weigh?

Simple bugles weigh around 0.88 to 1.1 pounds. However, contrabass bugles weigh between 25 and 35 pounds due to their lower range and amount of tubing.

Bugles don’t contain any valves, which can help keep the weight down. You do need to have a good embouchure to be able to play different notes on a bugle.

How Much Do Tenor Horns Weigh?

The tenor horn is the British term for what Americans call the alto horn. That means the two instruments weigh the same, at 6 to 16 pounds.

If you prefer British measurements, that equates to 2.7 to 7.2 kilograms. As with the alto horn, the material is one of the most significant factors affecting weight.

How Much Do Mellophones Weigh?

When in a marching band, most French horn players play the mellophone. This marching instrument weighs about four pounds on average but can weigh up to 12 pounds.

The weight distribution is one of the most difficult parts of holding a mellophone. The massive bell brings the center of gravity farther from the player, making it hard to hold up for long periods.

Also, most mellophone players are used to the French horn, which you hold lower. That can make holding this instrument much harder, but practice can help.

How Much Do Flugelhorns Weigh?

Flugelhorns weigh between 7.48 pounds and 10.65 pounds, though some may weigh more or less. The weight depends greatly on the materials, and flugelhorns use brass, silver, and gold.

Of course, the outward playing position can make it hard for beginners to play the flugelhorn for long periods. Like with other brass instruments, more practice tends to make holding the instrument easier.

How much do tubas weigh?

The specific weight depends on the materials and the number of valves the specific tuba model has.

Weight may also vary based on if it’s a piston or rotary valve model. Whether the tuba is in Bb or C can also affect how much it weighs.

Fortunately, you usually sit to play the tuba, so you can bear some of the weight using your legs. Many tubists will use a chair to raise one leg to help support the tuba if they need to stand.

What Is the Lightest Brass Instrument?

The lightest brass instrument is the standard bugle, weighing as little as 0.88 pounds.

Other relatively light brass instruments include the regular trumpet, pocket trumpet, and cornet.

What Is the Heaviest Brass Instrument?

The heaviest brass instrument is the tuba, which can weigh as much as 30 pounds. Of course, some models are a bit lighter, especially the higher-pitched tubas.

Another heavy brass instrument is the contrabass bugle, which can weigh as much as some tubas.

My Best Trumpet: How Much Does A Trumpet Weigh?