Many beginners shy away from playing the tuba because of its size and weight.

Tubas can be intimidating and cumbersome, but they are an important part of any ensemble.

Let’s talk about the weight of tubas, so you can decide whether choosing this instrument is right for you!

Here’s an Idea of How Much a Tuba Weighs:

A tuba usually weighs between 20 and 30 pounds. Because of their weight, concert tubas rest on a player’s lap instead of being held up like other brass instruments. Marching tubas rest on the shoulder to avoid being too heavy for the player. 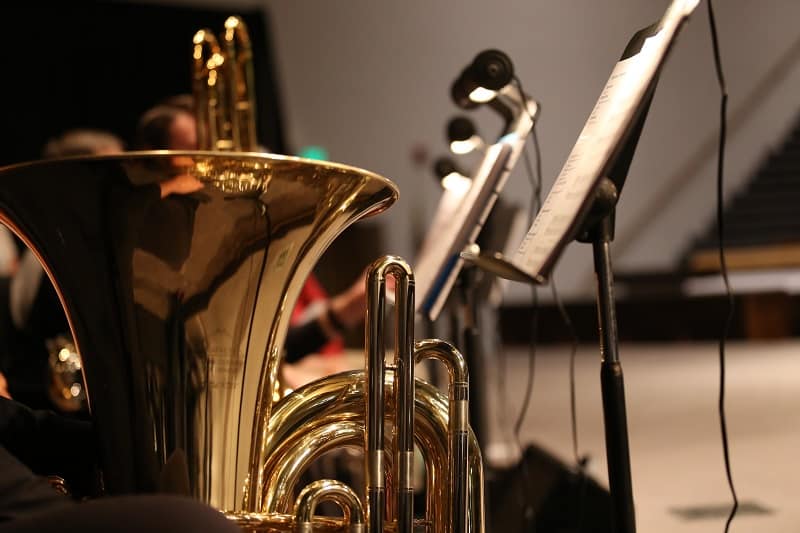 How Heavy is a Marching Tuba?

If you chose the tuba as your first instrument, your band director will eventually invite you to play in your school’s marching band.

Don’t worry, you won’t have to carry your concert tuba. You have a couple of options when it comes to marching tubas.

There are two types of tubas:

Sousaphones are circular and wrap around your waist.

They have the most unique shape out of all the different types of tubas. Specifically designed for marching, sousaphones won’t be as heavy as a concert tuba.

The contrabass bugle, shortened to contra, is frequently used by more experienced players in marching band and drum corps. Unlike sousaphones, contras look more like a concert tuba, except it rests on your shoulder.

Contras weigh between 25 and 35 pounds.

A contra and a concert tuba have similar construction. Even though a contra is designed to sit on your shoulder, it will still weigh as much as a concert tuba.

What is the Heaviest Tuba?

The average size of a tuba is three and a half feet high and around twenty pounds.

The heaviest tuba ever made is much larger than that.

The world’s heaviest tuba lives in Frankfurt, Germany. It is about seven feet tall and weighs 50 kg or around 110 pounds.

Unlike regular concert tubas, this one has to be played standing. This large tuba is fully functional, even though every part is twice as long as a normal tuba.

Needless to say, this tuba is very hard to transport to a music rehearsal!

How Much Do Most Brass Instruments Weigh? Here are 16 Models to Check Out!

How Much Does a Tuba in a Case Weigh?

A tuba case can weigh up to fifty pounds.

With this added to the normal weight of a tuba, carrying a tuba in a case can be pretty heavy.

Tuba cases weigh so much because they need to provide extra support and padding for the tuba inside. If they weighed less, the tuba wouldn’t be as protected.

Despite the case’s weight, it is usually made with wheels which make it easy to carry.

Normal cases have handles and a player has to lift the full weight of the instrument plus the case. With tubas, you can push or pull the case, which means you don’t have to lift its full weight.

Even though it has wheels, a tuba case can be hard to transport.

When you play tuba, you need to think about how you will carry it home to practice. Often a tuba player has trouble finding room for their instrument in personal vehicles or school buses.

Tubas are essential in any ensemble because they provide the lowest voice.

Every other player listens to their notes for intonation. Band directors are often looking for a new tuba player, but is it the right choice for you?

Here are some things to consider before deciding to play the tuba:

Any brass instrument requires a bit of stamina when playing for long times and using the breath to get the sound you want.

Tuba is a large instrument, so it helps if you are a taller person.

Concert tubas rest in your lap, and the mouthpiece is at a fixed level. Make sure that you hold a tuba before you make a decision.

Your mouth should be able to reach the mouthpiece comfortably.

Most tuba players start playing early, so young players might have to start on a smaller tuba.

3/4 tubas are designed for younger kids who can’t comfortably hold a full tuba. With a smaller instrument, players can start learning as early as age 8.

If only full tubas are available to you, you might have to wait until you’re older.

What is the Lightest Tuba?

A great musician often starts playing an instrument at a very young age.

This becomes a problem when younger students want to learn tuba because it is extremely heavy for them.

Many students can easily pick up smaller instruments like trumpet or flute but have difficulty lifting a tuba. Because of this, the tuba is the only instrument that makes a smaller size for beginners.

For younger players who want to start learning tuba, a great option is a 3/4 tuba. These are smaller and more lightweight than full tubas.

3/4 tubas weigh an average of 13 pounds. Compared to full-size tubas which weigh from 25 to 35 pounds, this can be a relief for younger musicians.

Band directors will often suggest 3/4 tubas for beginners because of their smaller size, lighter weight, and simplicity in construction.

3/4 tubas normally only have three valves and are non-compensating instruments. A beginner won’t have to worry about any complicated features on their instrument.

With a lighter tuba, a beginner can learn the basics of the instrument without struggling to hold it. It also makes it easier for them to take the tuba home to practice!

How Heavy is a Sousaphone?

Most high school marching bands use sousaphones instead of contras.

Sousaphones are the most unique tuba because of their construction. Unlike other tubas, it wraps around a player’s body, resting its weight on the left shoulder.

It was specifically made for students in marching band, being more lightweight and easier to carry. Students don’t find sousaphones awkward to carry while playing, making it easy to focus on marching.

Most sousaphones are lighter than other tubas, some being as small as 15 pounds. These are normally made from fiberglass instead of brass, making it easier for students to lift and carry them.

They can weigh as much as a concert tuba when made from brass. Their weight can be between 18 and 50 pounds, but high school sousaphones are typically in the lower range.

Older sousaphones can be extremely heavy. Modern ones can weigh as little as 15 pounds, but they weren’t always made to be lightweight. Older models can weigh up to 50 pounds.

Although most sousaphones are lightweight tubas, none are exactly easy to carry. Students who begin marching for the first time may get tired easily.

It can be an awkward experience when putting sousaphones on or taking them off. They are the only instrument that wraps around the player’s body.

A beginner needs to learn how to place a sousaphone over their head or how to step into it. This can take a while to become comfortable because of its unusual shape.

With other marching instruments, students can get tired of picking up and putting down their instruments. With sousaphones, players can leave their instrument on for a long time since it rests on their shoulders.

Can All Tubas Be Played While Standing and Marching?

Only sousaphones and contras are used for marching band.

Concert tubas are designed for playing while sitting.

Sousaphones and contras are built to rest on a player’s shoulder so that they can easily march and play. Concert tubas are meant to rest in a player’s lap.

Concert tubas aren’t heavier than sousaphones and contras, but if you tried to march with one, all its weight would rest in your arms. A player who tries to march a concert tuba will easily become exhausted.

You won’t see people playing concert tuba while marching. It’s not practical, and there are many great alternatives for marching tubas.

If you are considering starting to play tuba, you’ll need to decide whether you can handle a heavier instrument.

You will need to be prepared to carry your tuba to and from school, lift it frequently, and possibly march with it.

Although tubas are often very heavy, many types of tubas vary in weight.

3/4 tubas are a great lightweight option for beginners. Sousaphones are also fairly light and allow a student to march comfortably.

Sousaphones and contras make sure that you don’t have to constantly hold up your tuba while marching. Since they rest on your shoulder, marching with a tuba can be easier than an instrument that is held in your hands.

Regardless of weight, playing tuba can be a rewarding experience. As a tuba player, you will always be needed in every ensemble!

How Much Does a Sousaphone Weigh?

How Much Does a Tuba Weigh?