If you want to play the saxophone, you should know how much the instrument weighs. For better or worse, saxes weigh vastly different amounts depending on the range.

Here’s How much Saxophones Weigh: 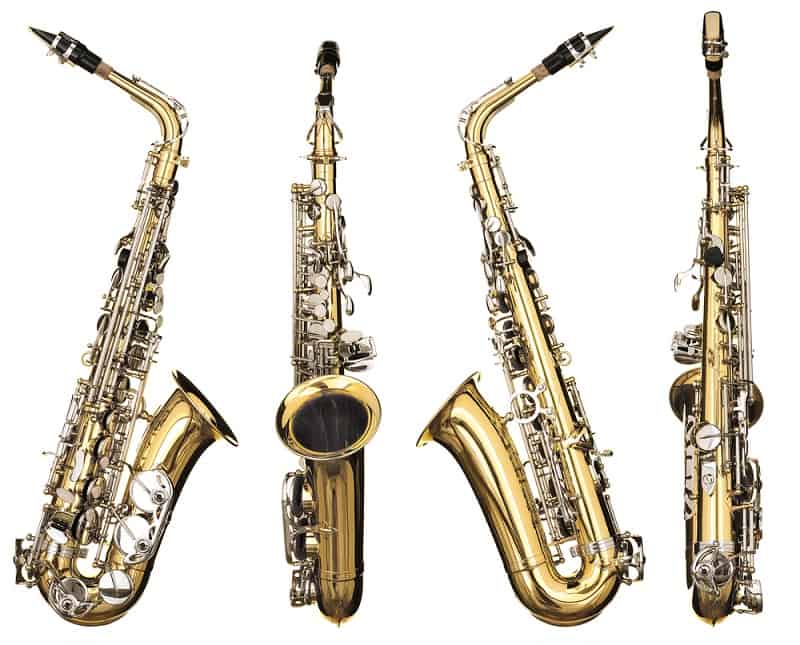 1. How Much Do Alto Saxophones Weigh?

An average alto saxophone weighs 4 pounds 5 ounces or about 2.19 kilograms.

The exact weight can vary depending on the materials of the instrument.

Silver or nickel plating can make the instrument a bit heavier than a model with a clear lacquer. Luckily, a neck strap can help take the weight off your hands no matter which alto sax model you play.

2. How Much Do Tenor Saxophones Weigh?

The tenor sax plays a fourth lower than the alto, so it’s quite a bit heavier at 6 pounds 4 ounces.

It’s almost 50% heavier than the other popular saxophone size.

3. How Much Do Soprano Saxophones Weigh?

On average, a soprano saxophone weighs about 2 pounds 2 ounces, about one kilogram. That makes it about half as heavy as the alto while playing a fifth higher.

While the weight may be the same, playing a curved soprano will bring the center of gravity up. That could make the more compact instrument feel slightly different from the standard straight soprano.

4. How Much Do Baritone Saxophones Weigh?

They play an octave lower than the alto saxophone but weigh more than twice as much.

The weight of a bari sax can depend on the materials and features. Some models have a low A, which extends the tubing, making the instrument heavier than a model without the low A.

5. Are There Any Lightweight Saxophones for Kids?

Many kids want to play the saxophone, but it’s only sometimes available.

In some beginning band programs, kids have to play another instrument for a while and switch to the saxophone a year or two later.

However, you can find some lightweight saxophones for kids who really want to learn the instrument. These instruments are lighter and usually more affordable, which is great if your kid might not stick with playing.

Consider the following lightweight options for kids who want to learn the saxophone.

How difficult is it to play the saxophone? Here are 9 Brass Instruments Ranked By Difficulty!

First, there’s the Nuvo jSax, a plastic instrument that looks very similar to a soprano saxophone.

It weighs about 1.9 pounds, so it’s slightly lighter than a metal soprano.

Since it requires much control to play well, beginners usually start on something other than the soprano. So this instrument is about half the weight of the more common alto saxophone.

Check out the Nuvo jSax here!

This model uses the same fingerings you’ll learn on a traditional saxophone, so your child can switch easily later. You can adjust the thumb rest to make holding it more comfortable as well.

Finally, the jSax is waterproof and very durable, so it can withstand much of what your kid might put it through. That way, your child can get more use out of it until they’re big enough to hold a saxophone.

The Yamaha Casual Wind Instrument is another option, and it looks similar to a soprano saxophone. However, it uses recorder fingerings, though they’re similar to the fingerings on a sax.

This model weighs about three pounds, so it’s heavier than a metal soprano but lighter than a metal alto sax. It would be best if you had large enough hands to cover the holes, so it’s not the best for really young kids.

The plastic is durable, and the instrument can last long. You’ll use the instrument with a soprano sax mouthpiece and reed, so you can replace those accessories easily if necessary.

Finally, this model is relatively affordable, which makes it a suitable option for kids who might quit after a few months.

Since the saxophone is part of the woodwind family, kids may want to start on other woodwinds.

Many kids will start on the clarinet, especially in a band program.

The clarinet weighs less, but the clarinet’s upper register shares the same fingerings as the saxophone. That can make switching easy, and similar embouchures also help.

Another option is to have your child learn to play the recorder. You can find plenty of cheap options, so your child can get used to blowing into an instrument and closing holes with their fingers.

The fingerings are slightly different, but many are the same. Transitioning from recorder to sax is harder than from clarinet to sax, but the recorder is one of the lightest instruments.

Want to know more about Trumpets Vs. Saxophones? Here are 8 Things To Know!

How Old Should You Be to Hold and Play the Saxophone?

Unfortunately, young kids must wait a few years before playing the saxophone.

Even the “smaller” saxophones, like the soprano and alto, can be heavy and bulky.

Before you start learning the saxophone, you need to be able to hold it comfortably. It would help if you were also strong enough to carry the instrument to rehearsals, lessons, and performances.

The exact age when you can start the saxophone also depends on the specific sax you want to play. Consider the following details regarding the most common members of the sax family.

You must be about 10 or 11 years old to play the saxophone.

Some people say children as young as seven or eight can play the instrument, but many kids at that age still need to be bigger.

When kids turn 10 or 11, they’ll usually be tall enough and have long enough arms to handle an alto sax. Kids at this age should also be strong enough to carry the instrument in its case, which can weigh much more than the sax itself.

Since the tenor sax weighs significantly more than the alto, kids should be closer to 12 years old to start it.

Like with this alto, you need to be physically big enough and strong enough to hold the tenor.

Yes, you’ll have a neck strap to help hold it while playing. But you have to be strong enough to carry the sax in its case and to be able to get the tenor sax out of its case.

Also, you need long arms to reach the keys, though this is more important for the right hand. Your arms should bend slightly to play comfortably, and younger kids may still need that reach.

Since the baritone saxophone is even larger than the tenor, you must be a year or two older. Most students should wait until they’re in high school before attempting the bari sax.

Now, some younger students who are taller than average may be able to play the bari first. The instrument is about three and a half feet tall, so you need to sit that tall to hold the instrument properly.

Luckily, many bari saxes come in cases with wheels, so you only need to lift it when going up and down stairs. But even with a neck strap or harness, it still requires more strength to hold than other saxophones.

You can be younger than 10 and start learning on the soprano saxophone since it’s lighter in weight.

While the sax is smaller than the other members, it’s also less flexible.

Most beginners start on the alto or tenor saxophone because they’re more forgiving. Only after you’ve played the alto sax for a while is it smart to switch to the soprano saxophone, so you should probably be 11 or 12 at least.

Regardless of the type of saxophone you want to learn, you must consider more than your age or that of your child. You also need to be strong enough to support the instrument when you’re playing it.

Between practice sessions, you’ll also need plenty of strength to carry the instrument in its case. Players must also have long arms to reach the keys, especially on the larger instruments.

Finally, it would help if you were tall enough to hold the sax when sitting and standing, but this is only a concern with the bari sax and lower.

How Heavy Are the Biggest Saxophones?

The most common are the soprano, alto, tenor, and bari saxes.

However, they’re far from the only members of the sax family, and multiple members are larger and heavier.

To explore these really low saxophones, you need to consider their weight. That way, you’ll know if you’re strong enough to handle the instrument.

Consider the weight of some less common low saxes.

The bass saxophone plays an octave lower than the tenor saxophone.

Like the smaller models, the bass saxophone’s weight depends on the materials used. If you get one with plating, it will probably weigh more than a bass sax without any extra metal layers.

Another rare saxophone is the contrabass, which plays an octave below the baritone sax.

The contrabass weighs about 44 pounds, which equals 20 kilograms.

This instrument stands over six feet tall, so it’s only suitable for adults to play. Even some adults might be too short for it or have hands that aren’t large enough to reach the keys.

The subcontrabass saxophone is the lowest and largest sax, weighing a massive 53.5 pounds, or 24.3 kilograms.

This instrument is very rare, and only Adolphe Sax made one.

If you manage to find one, it has over seven feet of tubing, though the instrument isn’t quite that tall. Still, you’ll need good air support if you want to produce a good sound.

There are so many different saxophones, and some weigh only a couple of pounds.

Meanwhile, the lowest sax tops 50 pounds, but it’s rare, so most people won’t need to hold more than the 11 pounds 2 ounces a bari sax weighs.