If you find that all of the jazz music you listen to calls for the sax, you may wonder why.

For many reasons, saxophones are popular in jazz: 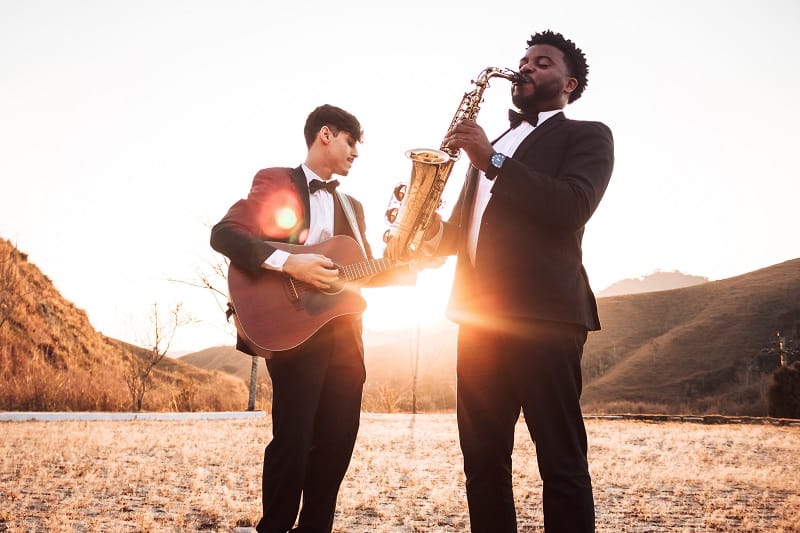 Adolphe Sax designed the saxophone with the intention for it to become a bridge between the woodwinds and brass.

Anatomically, saxophones are part of the woodwind family, but their tone is more similar to brass instruments.

The goal was that the sax could use those features to its advantage in classical music.

Unfortunately, Sax didn’t invent the instrument until the 1840s.

It took a few decades before musicians invested time into the instrument. By the time it became a standard instrument, there wasn’t any room for it in most standard orchestras.

There are some classical solos for the saxophone, but you won’t find them in orchestra music outside of a few select works.

Along with the intended goal, music history affected what the saxophone would later play.

For one, the instrument is quite young, at less than 200 years old.

Compare that to orchestral instruments like the trumpet or flute, which have existed in some form since the 1600s. The saxophone had a long road ahead of it to become popular.

While it may not have become a standard orchestra member, military and marching bands took to it.

These bands were an indirect predecessor to American jazz.

Since the saxophone had a place in bands, it could make a natural progression between ensembles.

While bands worldwide eventually used the saxophone, it started in France.

Marching bands in the country made the sax a crucial part of their ensembles.

That makes sense considering Sax was Belgian and moved to Paris in his late 20s.

The French easily became his first group to market his invention to.

Many of those musicians eventually moved to New Orleans, a former French colony and soon-to-be jazz hub. The musicians brought their existing instruments with them.

In the following years, French culture mixed with American culture and that of current and former slaves.

All those musical styles came together to inform the new jazz genre.

4 Saxophones Most Used In Jazz Music (Past & Present)

During the early years of jazz, musicians played whatever instruments they could find.

Since the saxophone was popular in French bands, it became a common member of jazz bands.

Of course, just being available isn’t enough for an instrument to become popular in jazz. Other early instruments included the tuba and banjo, neither of which are popular jazz instruments today.

The clarinet was also an early mainstay in jazz. While you can still hear the occasional jazz clarinet solo, it’s not nearly as popular as it once was.

Slowly, the saxophone overtook some of the other early instruments, such as the clarinet.

You can produce a good sound throughout the entire range of the instrument.

Compared to brass instruments that rely on the harmonic series, beginners can play multiple octaves on the sax more quickly and easily. The instrument’s design also makes it easy to play more lyrical melodies in slower ballads.

Being able to play in both styles makes the saxophone a versatile addition to any jazz ensemble.

Some other instruments can’t play slow and fast, at least not as easily.

Of course, saxophone players must practice, but the instrument sets them up for more success.

The saxophone can play fast and slow music, and its design allows the player to project their sound. That’s crucial when you’re playing with trumpets and trombones since they can be loud.

While the flute is made of metal, silver can’t project as far as saxophones that use brass. Whether you play the soprano, alto, tenor, or baritone, you can get a good sound in a large jazz band.

However, the sound is also suitable for smaller groups, such as trios or quartets. You don’t have to overwork yourself to make your sound carry over an ensemble.

As you play the saxophone, you can get a nice, emotional tone quality. That allows you to play very expressively, especially when performing a solo.

But even in a group setting, the expressiveness of the saxophone shines through. You can play in a way that sounds sad when performing a ballad.

If you play something more upbeat, you can adjust your tone to sound happier and more positive. That versatility comes in handy since jazz is a very broad genre of music.

Other instruments can be expressive as well, but there’s something unique about the saxophone.

Is The Alto Saxophone Hard To Learn? (Explained)

The saxophone is a family of instruments, including the soprano, alto, tenor, and bari sax.

For example, the bari sax is the lowest of the four most common saxophones, so it’s an excellent choice for the bass line. The tenor sax often plays a counter melody since it has a low range as well.

You might hear the alto or soprano sax play the melody in many jazz band works.

However, you can hear a solo on any of the different types of saxophones.

Tenor and alto solos are probably the most common, but the soprano and baritone can also be nice choices for solos with higher or lower ranges, respectively.

The size of the different horn sections is also worth considering.

However, the ensemble usually calls for five saxophone players. The section breaks down further to include two altos, two tenors, and one baritone.

Now, you could argue this reason is more of a chicken and egg question, which came first.

It’s possible the saxophone’s popularity caused there to be five saxophone parts in big bands.

But the extra sax part could also fuel the instrument’s popularity compared to trumpets and trombones.

It took a bit of time for the saxophone to become a standard part of jazz music.

However, ever since, jazz sax players have continued to inspire new generations of musicians to pick up the instrument.

The jazz players of the 20th century inspired a lot of players from the late 20th and early 21st centuries. Oddly, today’s players will probably do the same for future players.

Many jazz sax players sound amazing, and listeners want to be like the people they admire. That will probably help keep the saxophone in the spotlight regarding jazz music.

Also, the world of jazz saxophone players has become more diverse, with many women taking up the style.

Over time, the diversity might encourage even more diversity from future generations.

Saxophones are some of the most common instruments in jazz music, and there are many reasons why.

From the history of the sax to its standard sound, the instrument has played a huge role in the development of jazz.