It can be difficult to know the differences between members of the brass family, especially when it comes to euphoniums and baritones.

These instruments resemble tubas and are very commonly confused. The baritone and euphonium are constructed similarly, but what makes them different?

Let’s dive into the differences between the baritone and euphonium:

Here are the Differences Between Baritone and Euphonium:

Baritones and euphoniums have different bore sizes. Euphoniums are conical, whereas baritones are cylindrical. Because of this, euphoniums have a darker sound, and baritones will have a brighter tone. Beginners benefit from starting on baritones because they are lighter and easier to play. 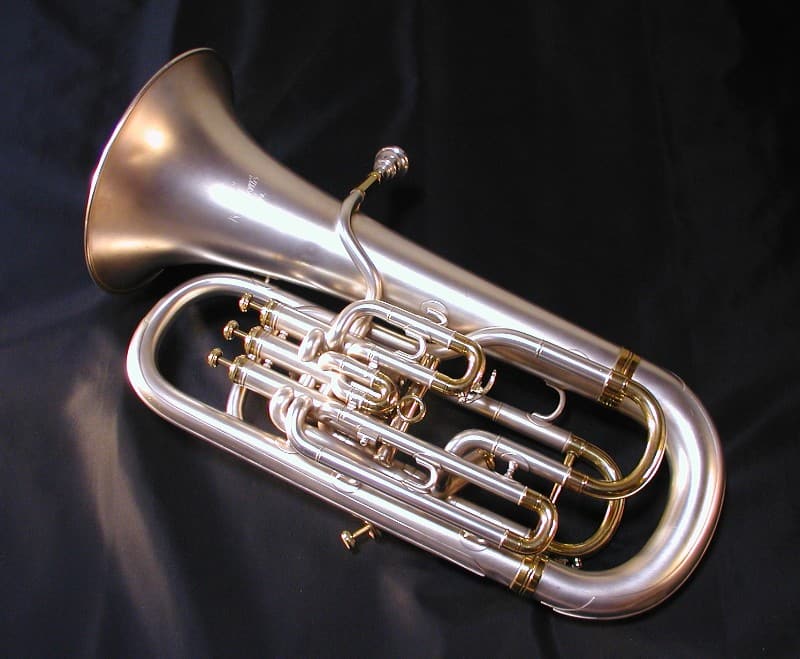 *Check our price comparison to see who's cheapest.

Are the Baritone or Euphonium Horns More Popular?

Both baritones and euphoniums were first constructed in 1828, but euphoniums have gradually become more popular in the modern era.

Beginners usually start learning on a baritone but will switch to euphonium as they transition into an intermediate player. Baritones can be easier to play, but many people prefer the rich, deep sound of a euphonium.

Composers love to use baritones and euphoniums in their compositions because of their unique sounds. Although they are both within the same family, they produce a different timbre.

Euphoniums have a mellow and warm sound. In contrast, baritones have a light, bright tone.

Baritones can more easily cut through the different sounds of an ensemble. However, euphoniums are featured in more solos. Most composers prefer the tone color of a euphonium.

The Difficulty for Beginners:

Both are used in brass bands, but euphoniums generally have more complicated music.

Baritones provide a unique timbre to the tenor voices.

Most music teachers recommend that beginners start on baritone. Euphoniums are heavier and require much more air.

Often beginners can easily make their first notes on a baritone, while euphonium takes more of a learning curve.

Once players have practiced for a few years, they transition to euphonium. When they are older and more advanced, learning euphonium is much easier.

The four-valve euphonium is very popular among advanced players.

They are specially constructed to improve intonation and extend range. Certain notes will be out of tune with regular euphoniums, but the fourth valve eliminates this problem.

Euphoniums with four valves are called compensating instruments. Many professional players appreciate compensating euphoniums because they can adjust lower notes to bring them in tune. In an ensemble, this can be very valuable.

Beginners often don’t have to worry about their very low range quality, but professional players do. Compensating euphoniums with four valves make it easier to play more advanced music.

To learn more about the function of the fourth valve, check out our article: What Brass Instruments Have Four Valves? (Four Examples)

Which is Easiest to Learn (For Beginners)?

Beginners should start learning the baritone rather than the euphonium.

Euphoniums can be wider and heavier, making it harder to play. Beginners are often young, so they need lighter instruments.

Because euphoniums are slightly heavier, it can be difficult for a student to lift, carry, and transport them.

That being said, these instruments are both lighter than tubas. It can take time, but all students can get used to heavier instruments.

To play the euphonium, it can take much more air to make a great tone. Because of its conical bore, a player will need deeper breaths and strong air pressure to produce a note.

Playing baritone can be slightly easier because of its cylindrical bore. Because the tubing is the same size throughout the instrument, it won’t need as much air.

Although both euphonium and baritone can have four valves, it is generally more common for euphoniums.

If a euphonium compensates with a fourth valve, this can be needlessly complicated for beginners.

Beginners often choose baritones for their first instrument because they are easier to play, lighter, and have a more simple construction.

What are the Main Differences Between the Two?

Although baritones and euphoniums are played similarly, they have some differences in their construction.

Baritones and euphoniums have the same length of tubing. However, when you look at both instruments, you’ll see noticeable variations.

The main difference between euphonium and baritone is bore size.

Bore size is the diameter of a brass instrument’s tubing.

Baritones have a smaller bore size than euphoniums, which allow them to have differences in sound quality.

A baritone is also a cylindrical instrument, meaning it has a consistent bore size throughout its tubing. The brass tubes are relatively the same size until it flares into its bell.

On the other hand, euphoniums have a conical bore. This means that the tubing gradually increases in size from the mouthpiece to the bell.

Because euphoniums have a conical bore, they have a darker sound. In contrast, baritones have a brighter tone due to their cylindrical bore.

Although baritones rarely play melodic lines in an ensemble, they add to the upper voices.

Baritone players are a part of the tenor voices.

Both baritones and euphoniums are essential in providing harmonic lines to a piece of music. When a composer needs a tenor voice for a solo, euphoniums are more widely used.

Euphoniums have a much fuller, darker sound. It requires more air to produce a good tone. Beginners may struggle to make a sound on euphonium and find it easier to play baritone.

Both instruments are found in brass bands, but euphonium players will have the most technically demanding music.

Most euphoniums are designed for advanced players, so some will have an extra valve.

Baritones will usually have only three valves, but euphoniums can have four.

When players use this extra valve, they can play with much better intonation. They can also play chromatic notes between the first and second partials, which were otherwise unplayable.

Most advanced players use compensating euphoniums because of their extended range. Beginners typically use baritones.

One similarity between the two instruments is that they are both in the key of Bb. You don’t need to transpose music when switching from baritone to euphonium.

For more information on the differences between euphonium and baritone, check out this video:

Are There Any Notable Price Differences?

Although it depends on the brand and level of the instrument, baritones are the cheaper option.

For euphoniums, they are in a slightly higher price range. On Woodwind and Brasswind, euphoniums sell for around $1,800 to over $3,000.

A standard, three-valve euphonium costs around the same as a baritone. Compensating euphoniums often cost much more. Depending on the brand, you could pay over $5,000 for a great euphonium.

It can be difficult to know the differences between the baritone and euphonium because they are very similar in construction.

Beginners often struggle in choosing between them because of this.

Euphonium and baritone have one major difference: bore size. The diameter of each instrument’s tubing is constructed uniquely.

The euphonium has a conical bore, while the baritone has a cylindrical bore. A euphonium’s tubing gradually increases in size until it flares into a bell. Baritones have tubing, which is roughly the same diameter throughout the main part of the instrument.

Even though they both have equal lengths of tubing, the euphonium is usually heavier and bulkier. Because of this, beginners usually decide to start learning on a baritone first.

Additionally, euphoniums are slightly more expensive. They are ideal for intermediate and advanced players who want a deep, rich tone.

If you are struggling to choose the right instrument for you, consult your music teacher! They will offer you advice based on your unique needs. It would be best if you also played on each instrument to see which one you prefer.

A Guide to Baritone, Euphonium, and Tuba

What is the Difference Between the Baritone and Euphonium?

What’s the Difference Between a Baritone and Euphonium?